The Curious and Tragic Case of Dr. Haiselden and the Baby Bollinger

Just about one hundred years ago, in November of 1915, a baby was born to a husband and wife. The baby was born with only one ear and some medical issues that would lead to the baby's death unless something was done.

Enter Dr. Harry Haiselden, a prominent young Chicago surgeon, to examine the child. Upon an examination, the doctor decided that the "defective" baby's life was not worth saving. Not only did he decide that but he convinced the parents to allow the baby to die. But Dr. Haiselden did not stop there. Not content with allowing the baby to die, he hastily called a news conference to publicly announce his decision. An instant celebrity was created.

You must recall that at the time the intelligentsia was beginning their gleeful embrace of eugenics. So, suddenly, Dr. Haiselden was the subject of a national debate concerning the baby Bollinger. Haiselden's argument is worth noting in that he argued that the baby would likely become "an imbecile and possibly criminal." Dr. Haiselden made it clear this is not the first child he would allow to die. But he was tired of it taking place in the shadows.

The baby's medical issues are not perfectly clear but clearly Dr. Haiselden made it clear the baby was not fit to live. However, the Commissioner of Health of the City of Chicago Dr. John Dill Robertson testified about the case saying:

When I visited the German-American Hospital eight hours before this baby died and made an examination of it and viewed the Roentgen-ray pictures, I was startled to observe that this was not the defective baby that I had expected to see... There was nothing to indicate that this child would have been mentally defective except that which would come from the absence of the sense of hearing on the right side.

Dr. Robertson said that the making of an “artificial opening” in the anus could have been performed but instead Baby Bollinger was allowed to die. The baby was never given a first name. Reportedly, a coroner's jury of six physicians and surgeons declared shortly after that "it found no evidence that Baby Bollinger would have become mentally or morally defective, as Dr. Haiselden believed. It expressed the belief that the infant's physical defects might have yielded in a measure to plastic treatment."

But Haiselden reportedly insisted, "My entire training and religious belief teaches me that a physician's highest duty is to relieve suffering, but not necessarily to prolong a life which will be a burden to the poor suffering individual." In the years following, Dr. Haiselden became a major celebrity espousing death for defectives. Another child, named Grace Werder, was allowed to die. The Chicago Daily Tribune reported:

The father was grimly satisfied that the best action had been taken. The infant which had been taken by a nurse and baptized with the name "Grace" to the joy of the mother had blue eyes and curly hair. But Mr. Werder declared himself content. "I was not moved by the Bollinger case," he said. "I read little of it. But when these things come home I tell you it's hard to decide other than I have done. I wanted the child to die -- though I might have grown to love it. I am a believer in prenatal influences and I believe firmly that the sight of a hopeless paralytic in a wheel chair which gave my wife a nervous shock was the cause of this."

That's Right Says Haiselden Dr. Haiselden concurred in this view. "There is no doubt that monstrous things have their effect on a prospective mother," he said. "And this may have had its effect on Mrs. Werder. The Werder baby could have been saved by an operation for spina bifida which would have drawn the membranes together and thus prevented spinal meningitis, which caused the death of the baby. But it is a thousand times better dead."

Haiselden believed that certain children's very existence diluted the nation's societal health and when allowed to live they would only hurt themselves and others. The doctor clearly became enamored of the spotlight. He made himself absolutely available to the press and media of the time, even inviting the press in to look at the babies who were about to be killed. He was the toast of the town. The New York Times even reported on one of the incidents with the headline: "SURGEON LETS BABY, BORN TO IDIOCY, DIE; Dr. Haiselden of Chicago Refuses to Operate to Save a Day-Old Infant. FROM ALTRUISTIC MOTIVE Physician, Who Acted Similarly in the Bollinger Case, Suspects Pre-Natal Influence."

And on top of such media adulation, there was even a full length motion picture about his plight in the Bollinger baby case. And guess who got to star as Dr. Haiselden. Yeah, that's right, Dr. Haiselden. Promoters reportedly called the movie a "eugenics love story."

And this was no fly-by-night production with the then famous Leopold and Theodore Wharton fresh off their success with The Perils of Pauline directing. A reporter from the Chicago Herald, Jack Lait, wrote the script. The movie was screened in New York and Chicago and across the country and even for the Ohio state legislature. In the film, one of the titles read, "There are times when saving a life is a greater crime than taking one."

Here's a snippet of the movie with a voice over at times:

Horrifyingly, the film goes on to show an actress portraying the distressed mother deciding whether to allow the baby to die. While considering this she has a dream in which she sees the child's future where the child is an outcast and eventually becomes a criminal. In the dream we see the boy turn into a man who eventually fathers even more defective children. The man, desperate about how horrible his own life is, searches out the doctor who saved his life as an infant and says, "You are the man who condemned me to this life of torture and shame. See what you have saved me for? Now you'll pay." He then shoots the doctor.

But wait, it gets worse. So much worse. The mother wakes up from the dream and decided to allow the baby to die. Dr. Haiselden does his best look of contentment while standing over the baby. Then the film gets super crazy and shows the baby's soul leave his body and leap into the superimposed image of Jesus waiting with His arms open.

Ah, eugenics with a happy ending. 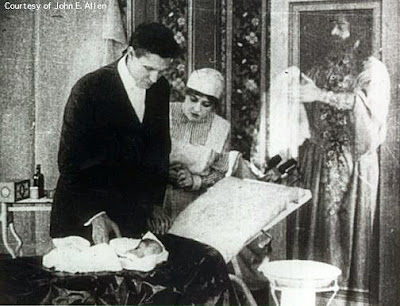 Haiselden, it seems, was investigated numerous times because the Chicago Medical Society at the time but it seems he was ousted not so much for allowing babies to die or even killing them but for publicizing his work so brazenly. In 1919, Dr. Haiselden died of a cerebral hemorrhage.

I leave it to you to decide what, if anything has changed in 100 years. I wonder if Dr. Haiselden would feel very much at home in 21st century America.

Barrett, a federal judge on the 7th Circuit Court of Appeals, has been reported to lead the president’s short list, and was also a contender for Trump’s second Supreme Court nomination in 2018, before the president nominated Justice Brett Kavanaugh.

BOOK PICK: Fatima: 100 Questions and Answers on the Marian Apparitions

COMMENTARY: Blessed Pius IX inaugurated a new era for the Church by dissolving the Papal States.

COMMENTARY: The Netflix film supports the claim that the global ruling class approves of pedophilia.

Why Abortion Is Different From Other Issues