How Long Will We Have to Wait for Our New Pope?

As we look forward to the coming conclave, it's natural to ask, "How long will it last?"

Nobody knows at this point, but it's possible to get a sense by looking at history.

Here are some surprising things you may not have known.

Birth of the Conclave

In the history of the papacy there have been periods in which the chair of St. Peter was vacant for startlingly long periods of time, at least by modern standards.

The longest of these occurred after the death of Pope Clement IV in 1268.

After he died on November 29th of that year, there was no new pope until September 1 of 1271, when Gregory X became pope.

This happened because the cardinals were deadlocked and could not agree on a new pope.

To pressure them into coming to a conclusion, the magistrates of Viterbo (where they were meeting) locked them up, reduced their rations to bread and water, and tore the roof off the palazzo where they were housed, to expose them to the elements.

Even so, it took a year after that!

When it was all over, Gregory X introduced a new law, based on what had happened, which essentially called for the modern conclave system, where the cardinals are sequestered until they get the job done.

It took a while for the conclave to stick, but this is where it started.

Here's a chart of how many days all of the papal elections have taken since October 1503--more than 500 years! 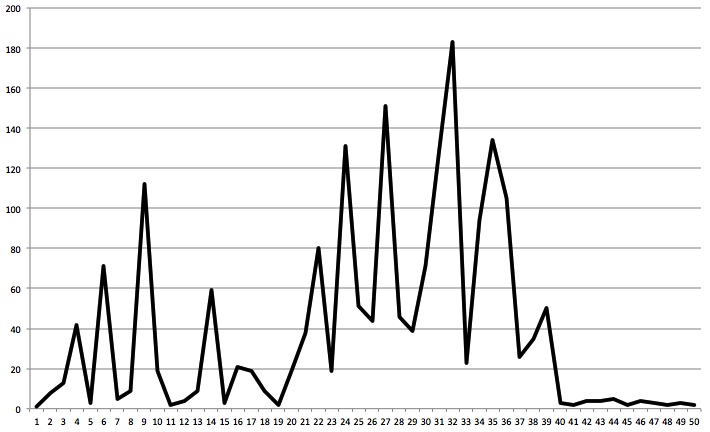 As you can see, the length is all over the place before we get to a certain point.

The very first entry (at the far left) is the election of Julius II in October 1503, which was the shortest papal election on record, taking only a few hours.

Then it spikes up and down, reaching the highest peak in 1740, with the election of Benedict XIV, which took a whopping 183 days!

And then, after the election of Gregory XVI in 1831, something changes.

The length of conclaves becomes much shorter and consistently falls within a narrow range.

The cardinals now have their act together.

Here's a chart of all the papal elections since 1846 (the first of the new period) and how long they lasted in days: 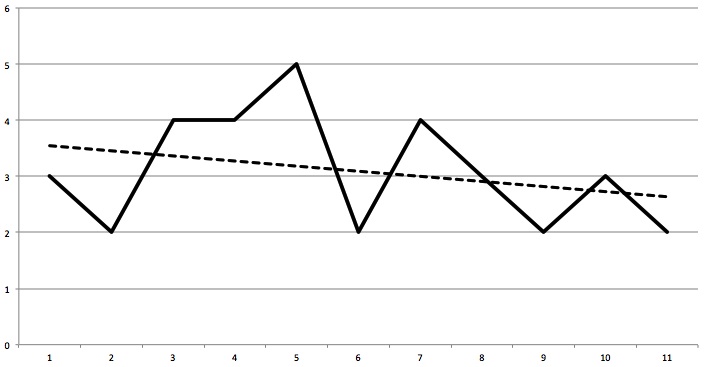 As you can see, since 1846, when Pius IX was elected, all of the conclaves have taken between 2 and 5 days--less than a week!

If you look at the trend line, it would seem that there's a bit of a trend toward shorter conclaves, and that's true, but not for the reason you might expect.

The real thing that drives how long a conclave lasts is how many ballots it takes for someone to be elected.

So here's a graph of the same elections and how many ballots they are thought to have taken (the precise number is sometimes difficult to determine because of the secrecy rules): 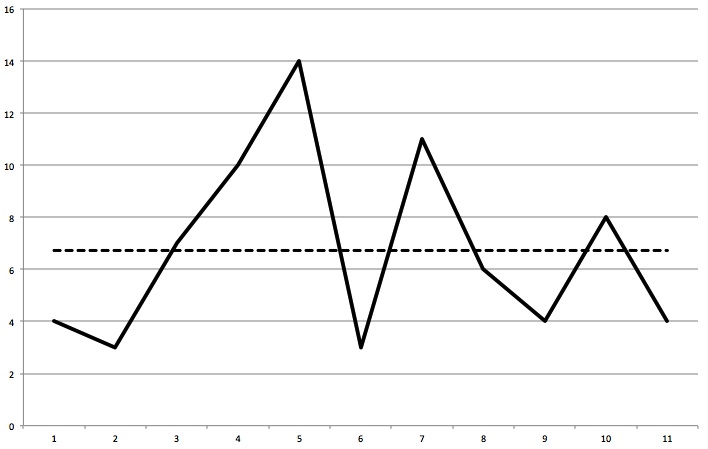 When you look at this chart, the trend line vanishes.

The average conclave takes around 6-7 ballots, and that hasn't changed since 1846.

Why has the length of days changed?

It's because they are doing more ballots per day.

Originally (in this period), they were doing two ballots a day, but now they're doing four ballots a day (except the first day, when if they get a late start they only do one).

How long the new conclave will take will depend on how many ballots it takes the cardinals to arrive at a consensus.

That should be somewhere between 3 and 14 ballots, based on recent experience, with an average being 6-7 ballots.

I suspect that it will not be a super-short conclave, lasting only 3-4 ballots, like the ones that produced Pius IX, Leo XIII, Pius XII, John Paul I, and Benedict XVI.

Instead, I suspect it will at least take 5-8 ballots, like the ones that elected Pius X, Paul VI, and John Paul II.

It may even take 9-14 ballots, like the ones that elected Benedict XV, Pius XI, and John XXIII.

Or it could go longer still (by a bit).

The reason has to do with what you could call the "Frontrunner Effect."

There's a well-known--but false--claim that the men most talked about as papabile ("pope-able" men) don't get elected, that the true new pope tends to be a surprise.

That isn't borne out when you look at the historical data.

It's certainly true that most of the talked-about papabile don't get elected. That's for the simple reason that there are multiple papabile at any one time but only one of them can end up as pope.

But the final electee is not usually a complete surprise. He's usually among those who have been well discussed before the election.

Sometimes, though, there are a small number of candidates who are clear frontrunners.

When that number is really small, it doesn't take long for the cardinals to coalesce around a particular candidate. That's what happened in the 3-4 ballot elections that elected popes like Pius XII, John Paul I, and Benedict XVI. These men were widely regarded as the frontrunners before their elections, and they were elected and elected quickly.

The Frontrunner Effect is, thus, that if there is a frontrunner, or a small number of them, it tends to shorten the conclave.

But in 2013 there isn't a clear frontrunner--or even a small number of front runners. There are at least a dozen men who have a real shot at being elected.

That being the case, it's likely that this conclave will take more than 3-4 ballots. It's more likely to take 5-8 or even more.

But not too much more, because as the number of ballots increases, so does the psychological pressure on the cardinals, lest the new pope be seen as not being firmly supported by the men who elected him.

So what does this mean in terms of days?

In part, it depends on when the cardinals decide to begin the conclave. If it's in the afternoon then they only have one ballot the first day.

It also depends on how long it goes. After three days, they have to take a pause for reflection, which may take up to a whole day.

But by the time that would happen, they would have taken between 9 and 12 ballots (depending on the afternoon start), and we're likely to have a pope by then.

My present guess, thus, is that the new conclave is likely to take 2 to 3 days, based on the likely number of ballots.

It might take 4 to 5 at the outside, but more than that is not likely.

I'll be able to refine this guess a bit more once we know--for sure--when they will start.

In any event, we're virtually guaranteed to have a new pope by Easter.

Legal scholars see the court’s reluctance to overturn past rulings, even highly controversial ones, as Mississippi’s greatest hurdle.

Archbishop William Lori, chairman of the USCCB Committee on Pro-Life Activities, prayed the Supreme Court would ‘protect millions of unborn children and their mothers from this painful, life-destroying act.’

Arguing her case before the Supreme Court, Julie Rikelman, representing the abortion clinic challenging the Mississippi law, framed adoption as a burdensome and unrealistic option — but Justice Barrett offered another perspective