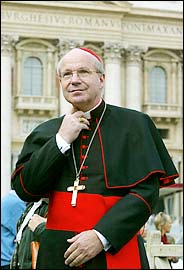 The Internet has been abuzz with reports that Cardinal Christoph Schonborn of Vienna, Austria has made some rather unusual statements.

The one that has been getting the biggest headlines is that he criticized (explicitly or implicitly, accounts seem to differ) Cardinal Angelo Sodano, accusing him of blocking an investigation of Viennese Cardinal Hans Hermann Groer in the 1990s, when then-Cardinal Ratzinger wanted to initiate an investigation regarding allegations that Groer had committed sexual abuse.

The investigation wasn’t held, but Groer was soon replaced as the cardinal archbishop of Vienna by Schonborn himself. (Read about Groer here.)

He’s also allegedly said that the Roman Curia is in urgent need of reform and that Pope Benedict is gently working toward that goal.

While it’s certainly noteworthy for one cardinal to publicly criticize another—whether explicitly or implicitly—any remarks Schonborn may have made regarding Sodano or the need for curial reform pale in comparison to other remarks he is reported to have made.

According to The Tablet:

Questioned on the Church’s attitude to homosexuals, the cardinal said: “We should give more consideration to the quality of homosexual relationships,” adding: “A stable relationship is certainly better than if someone chooses to be promiscuous.”

The cardinal also said the Church needed to reconsider its view of re-married divorcees [receiving Communion without an annulment and convalidation] “as many people don’t even marry at all any longer”.

If the good Cardinal is being accurately represented by The Tablet then something is very definitely wrong. But before betting the farm on The Tablet’s accuracy, we should note a few things.

First, we’re dealing with story in translation, because the Cardinal’s remarks were presumably delivered in German, as we was apparently speaking to members of the Austrian press. We therefore have to watch out for possible translation issues.

Second, the facts of the whole situation are unclear. I haven’t been able yet to even determine the nature of the event in which Cardinal Schonborn made his remarks. Precisely what day did it happen? Accounts vary. Was it a press conference, an interview, or some kind of informal get-together? Accounts vary. Was it to Austrian press editors or reporters? Accounts vary. LifeSiteNews is even reporting that he made his remarks to The Tablet. (As The Tablet’s story makes clear, he was speaking to members of the Austrian media; The Tablet is a British publication that was merely doing an English-language story on the Austrian session.)

Third, and more importantly, we don’t have a transcript of the event—in German or English. I’ve done a bunch of searching online, including Austrian news services, and I haven’t been able to come up with a fuller account of his remarks. Without a transcript, we can’t tell what precisely he said and in what context. All we have to go on are press summaries and partial quotations, and we all know how reliable those can be.

Sounds like situation ethics or utilitarianism, with the denial that any acts are intrinsically wrong, so that you can do whatever makes you happy, or whatever promotes the most happiness—a position firmly rejected in the Catechism and John Paul II’s encyclical Veritatis Splendor—right?

Well, that may be the way it sounds based on how The Tablet reported it, but The Tablet didn’t actually quote him, so suppose Cardinal Schonborn actually said something like this: “Many of us were raised with the idea that God’s laws are imposed on us arbitrarily, from without, and that we need to focus on obeying them as a matter of duty alone, totally unconnected from the good that God’s laws are meant to bring us. In reality, God’s laws are not arbitrary or capricious. They are not imposed from without. Rather, they are based on human nature and are designed—as John Paul II said in Veritatis Splendor—to bring us happiness and human fulfillment. It is precisely by obeying God’s laws that we find true fulfillment and eternal happiness, and we need to work toward a situation where people realize this rather than just viewing God’s laws as a matter of sheer duty towards arbitrary commandments.”

Doesn’t sound nearly as bad, does it?

In fact, it sounds a lot like things John Paul II and Benedict XVI have said—and like what a cardinal in Austria might say given the disastrous pastoral situation in that country, which was the one that gave us the Wir Sind Kirche or “We Are Church” movement back in the 1990s. The country is so secularized and the situation so pastorally fragile that one could cut the cardinal archbishop of Vienna some slack for expressing himself in ways that sound different than how he might express himself in areas where adherence to the faith is more robust (just as Paul complimented the religiosity of the pagan Athenians at the Aeropagus as a prelude to preaching the gospel of Christ; Acts 17).

But how far does this kind of explanation go?

I don’t know. I can see how the “morality based on happiness” thing could be redeemed (potentially), but I can’t make heads or tails of his alleged comments concerning the divorce and remarried and whether they should be able to receive Communion. What does many people not marrying any more have to do with that? The sheer inexplicability of this makes me wonder if there is important stuff being deleted.

What about the statements that, “We should give more consideration to the quality of homosexual relationships,” and, “A stable relationship is certainly better than if someone chooses to be promiscuous.”

I don’t know what the first of these means. Certainly there are differences in the “quality” of “homosexual relationships.” A once-in-a-lifetime”, one-night-stand “relationship” is certainly different in quality than an ongoing many-thousands-of-illicit-sexual-acts-with-the-same-person relationship, but why does more consideration need to be given to this—and is this even what the Cardinal has in mind?

It would seem not, if the second assertion is an accurate, in-context quotation. I don’t know at all that a “stable [homosexual] relationship” is better than if someone “chooses to be [homosexually] promiscuous.”

And if HIV/AIDs is factored out of the picture, I don’t know if the statement is true from any perspective. It seems to me that a person who is promiscuous has a greater chance of burning out and realizing the emptiness and the intrinsic disorder of the homosexual lifestyle than a person who stably and peacefully cohabits with the same homosexual partner for many decades, creating the illusion of a loving—as opposed to an obviously exploitative—relationship.

Still, in the absence of a transcript—or an A/V recording of the remarks—who knows?

Thus far we’ve looked at how Cardinal Schonborn’s reported comments might be more reasonably explained. But it should by no means go without notice that Cardinal Schonborn has said and done things in the past that are, at a minimum, quite eye-opening (here is his Wikipedia page, with the understood limitations of such pages).

So I don’t want to give anybody a free pass regarding this story. There could be press misreporting, there could be misstatements or problematic statements by Cardinal Schonborn, or both.

The problem is: We can’t tell what the situation is.

Thus, for the moment, the whole things goes under the heading of “Media Fail.”

The media has not done its basic job of reporting the facts in a clear and reliable way.

It may have been true, back in the days of the dead-tree/broadcast-only press, that because of economic considerations the media was constrained by word count and air time and that it could only present us with summaries of what newsmakers said, forcing us to rely on their reporters’ fairness and accuracy in composing summaries—but those days are GONE.

There is no longer a rational constraint on the ability of news agencies to provide us with transcripts, or at least audio or visual recordings, of what newsmakers say—complete and thus in context.

And if the press isn’t doing its job in this respect, newsmakers should bring their own recording equipment.

It’s not like it’s hard. A bunch of iPhone apps exist for this purpose.

But with this story we have a Media Fail, with The Tablet and other news sources not linking to the original transcript/recording that we need.

What are your thoughts?

The Wonder of Being

How can we not stand in silent awe before the actual world God made?

“The Gray Is Shrinking”, The Knights of Columbus: An Extremist Organization, And More!

Humanae Vitae offers a deep and radical affirmation of the dignity of women.

Speaking after the president, Barrett said she was “deeply honored” at by the nomination and called the moment a “rather overwhelming occasion.”

In an apparent reference to the ongoing coronavirus pandemic and months of demonstrations and civil unrest across several U.S. cities over racial justice issues, Trump said that faith was an important support for civil and national unity.

The aftermath of the strong storm shows much work continues to rebuild property and secure lives and livelihoods.

The Wonder of Being

How can we not stand in silent awe before the actual world God made?

“The Gray Is Shrinking”, The Knights of Columbus: An Extremist Organization, And More!

Humanae Vitae offers a deep and radical affirmation of the dignity of women.

Mel Gibson Working On Sequel to ‘The Passion of the Christ,’ Says Jim Caviezel

The People of Praise Community: What It Actually Is