A Doctor Begged a Religious Sister for Help. Last Week, She and Her Family Escaped Afghanistan.

Sister Byrne is a member of the Little Workers of the Sacred Hearts of Jesus and Mary, a religious order centered on service, prayer, and Eucharistic adoration.

WASHINGTON — When Sister Deirdre “Dede” Byrne picked up the phone in December 2021, a young man on the other end of the line told her something disturbing — and difficult to believe.

My mother is a doctor, he told the sister. You worked with her more than a decade ago in Afghanistan, at a U.S. camp near Pakistan. And now her life is in grave danger.

Some people might have dismissed the call as an elaborate hoax, but the details caught Sister Byrne’s attention. A military veteran, Sister Byrne had indeed been stationed at Camp Salerno, about six miles from the Pakistani border, around 2008. It was there that she crossed paths with Dr. M. (We are withholding her full name for her safety.)

The young man on the phone promised that his mother would send Sister Byrne an email, offering verifications of her identity. And in early January 2022, an email, typed in broken English, arrived in Sister Byrne’s inbox from the Afghan doctor herself, providing more details, and begging for help.

“I am lefted behind and facing deadly situation,” Dr. M wrote, explaining that on Oct.4, the Taliban had arrested her at her home and jailed her for three days before letting her go. She had been in hiding since her release, she said.

The Taliban seized control of Afghanistan after the Aug. 31, 2021 pullout by the United States military, and have ruled with oppression ever since. Afghanistan’s small community of Christians, many of whom risked death by converting from Islam, has been particularly at risk.

The New York Times recently reported that as many as 60,000 Afghans who have worked with American forces and applied for visas remain in Afghanistan. Dr. M and her whole family are Muslim, but became targets of the Taliban after the 2021 takeover because of their ties to the United States.

In her email, the doctor included screenshots of identifying documents such as her passport, and also a scan of a Certificate of Appreciation from the U.S. Army, signed by Sister Byrne.

“Please do some thing for me and My family and get us out from Afghanistan. I need urgent evacuation,” the doctor wrote.

In early February, Dr. M and her entire family got exactly that, thanks to a nonprofit called the Vulnerable People Project. After a tense escape, they are now at a safehouse in an undisclosed country.

“It’s a miraculous story, quite honestly,” Sister Byrne told CNA, and was quick to credit the Holy Spirit for using her, in a small way, to get the rescue going.

“I was like the center who hiked the ball, and I just passed it to the quarterback, and then let them run with the ball,” she said. 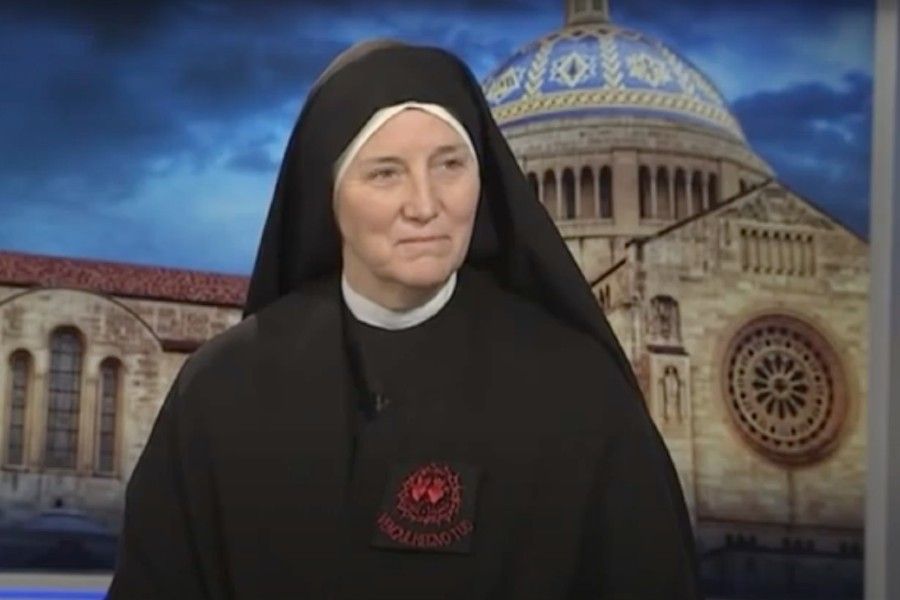 Sister Byrne is a member of the Little Workers of the Sacred Hearts of Jesus and Mary, a religious order centered on service, prayer, and Eucharistic adoration, and who is based in Washington, D.C.

She previously served as an Army doctor for nearly 30 years, rising to the rank of colonel before her retirement. As a missionary surgeon, she has made numerous trips to help the sick in Kenya, Haiti, Sudan, and Iraq. In 2020, she was a featured speaker at the Republican National Convention.

Sister Byrne said she remembers having a great relationship with the Afghan doctors she worked with during her service in Afghanistan, many of whom spoke English well.

But when Dr. M’s plea reached Sister Byrne’s inbox, at first her heart sank: she knew absolutely nothing about how to facilitate an evacuation.

“I'm nobody, really. I didn’t know how in the world we could help,” Sister Byrne said.

So, she asked around. Soon after, a senior assistant to U.S. Rep. Chris Smith (R-NJ) put her in touch with Jason Jones, director of the Vulnerable People Project. Since the U.S. pullout, the group has been campaigning for donations to send coal to Afghans, amid fears that hundreds of thousands of children are at risk of dying in a cold, collapsed Afghanistan.

Jones told CNA that the VPP has been primarily focused on delivering food and coal to Afghans in need, but with a recent uptick in violent incidents against Christians and other minorities, they have pivoted their efforts to getting vulnerable people out of the country.

Using the network of trusted Afghans they had set up to deliver food and supplies, the group has been able to coordinate a number of overland evacuations.

“It‘s a trust that we’ve built with people over time, and I think our food program has built us a lot of goodwill on the ground in Afghanistan, and people trust us,” Jones said. The group is keeping many of the details of how it does evacuations private for safety reasons, but Jones said their team is largely built from Afghans they have rescued. Key among them is Prince Wafa, an Afghan and U.S. citizen who worked as a translator for the U.S. military from 2010-2014.

Wafa told CNA that although he had been living in the U.S. since 2014, he was forced to travel to Afghanistan in late July 2021 to help his wife escape. That began a months-long ordeal whereby he was stranded in Afghanistan until October, after which he and his wife escaped to a refugee camp in Qatar, where they spent 40 days before making it back to San Diego in December 2021 with the help of the VPP. Prince Wafa, an Afghan-American working with the Vulnerable People Project, speaking during an appearance on EWTN News Nightly in December. EWTN/screenshot

Now, Wafa coordinates all of the VPP’s evacuations from Afghanistan, using familial connections because “those are the only people I can trust.”

“We've been fighting this for a long time now. We just try to do what we can,” he said.

When the VPP took on Sister Byrne’s request, Wafa’s team was able to deliver Dr. M, her children, and her grandchildren an aid package of food and coal within hours.

“We can get food and coal anywhere in Afghanistan within 24 hours, most places within four. So we were, within about four hours, able to deliver them food,” Jones said.

Wafa’s people then set about getting passports and visas for Dr. M and her family, which took a few weeks, but by Feb. 3, everything was ready for them to make their escape. Finally, on Feb. 8, the 13-person group succeeded in leaving Afghanistan via an overland route, skipping through the border packed into three cars.

“I have worked with people where there's a lot of talk and no action. This group is very little talk, and so much action. I was just so impressed,” Sister Byrne commented.

Wafa and Jones both stressed that their operations rely on donations, and urged all people of good will to consider donating.

Afghanistan is over 99% Muslim, with the majority being Sunni. There are small groups of Christians, including about 200 Catholics, as well as a few Buddhists, Hindus, and other small minorities.

Sister Byrne said during her time in the military, she encountered many Afghans who had never met a Christian, and who had never even heard of famous Christians such as St. Teresa of Calcutta. When inquisitive Afghans commented on her kind demeanor, she would explain that she was a Catholic sister.

“There is a great opportunity to bring the faith to people when you're put in a situation where you have had the opportunity to go to Afghanistan in such a protected way by being with our military,” she said.

In St Louis, This Catholic Rallies Her Community to Treat Afghan Immigrants ‘Like Jesus’

All of her work helping needy Afghan families, Wittman says, stems from her Catholic faith, and the imperative she learned growing up to treat the poor as if they were Christ himself.

COMMENTARY: The somber 20-year anniversary was met this year with another somber development — the American withdrawal from Afghanistan and its return to the Taliban. And it need not have been.

‘Coal for Christmas’ Aims at Saving 5,000 Afghan Families From Freezing and Starving

Jason Jones, a U.S. Army veteran, has been involved in a number of operations aimed at saving the lives of Afghan Christians whose lives have been in imminent danger since the rise of the Taliban.