In sports, it’s called a rebuilding year. It’s when everything’s gone wrong, but there’s still hope for the future.

Everything went wrong a year and a day ago when 15 year old Lenny Martelli fell off his snowboard in Schwenksville Pennsylvania. His friends gathered round him as he lay in the snow and they heard the words nobody wanted to hear.

This is a story about a year when reason allowed no reason to hope. It’s a story about a miracle that culminated on the basketball court at St. Joseph’s University—under the glare of television cameras from news networks and ESPN. Thousands in the stands cheered Lenny’s name, but there was no amazing basket with seconds left on the clock that night. No dunk highlights. This was a different kind of miracle altogether. The kind nobody expected. But maybe that’s exactly when miracles happen—when nobody expects them.

Everyone there, including the players on the opposing bench, knew that something more important than a basketball game was occurring. In a movie, this would be the soaring music, get the tissues, and cue the credits moment but there was so much more that happened in the quiet of a hospital room behind that moment. This is a story about faith and the ultimate rebuilding year. This is the story about how a mother’s love and the kindness of a complete stranger inspired the impossible.

Lenny Martelli, a 16 year old boy, walked out onto center court holding his canes in his left hand and waved. “It wasn’t my best walking performance,” he criticized himself later with a smile.

Doctors offered the Martellis a grim prognosis. The injury had left Lenny paralyzed from the chest down. They said the statistical likelihood of Lenny walking ever again was slim to none. But sometimes that little space between slim to none is all the space a miracle needs to slip in unnoticed and change everything.

Leti Martelli took a leave of absence from teaching at Our Lady of Victory School and she stayed with Lenny every day. She was there when doctors asked Lenny if he could move and she watched his frustration when he couldn’t. She asked the doctors every medical question she could think of and prayed at his bedside to Padre Pio and St. Therese. And she was there when a therapist off-handedly asked Lenny if he was related to Saint Joseph’s University basketball coach Phil Martelli. He said he wasn’t but he’d love to meet him. That was all Leti needed to hear.

When Leti heard that something might make her boy smile when smiling ever again seemed like a fantasy, she would’ve done anything. So Leti called Saint Joe’s and asked to speak to coach Phil Martelli. It was a desperate call to try to bring a little hope into her son’s life. She left a message and an hour later when she picked up the phone Phil asked if her name was really Martelli as well and then he said, “Tell me your story.”

Leti started but could hardly get through it. “My name is Leti Martelli and my son was in a serious accident.” Then came the tears. It’s strange how you can live through just about anything as long as you’re looking forward but when you look backwards even for a moment, the words themselves become too heavy to pronounce; as if saying them is harder than living them.

In the end, she asked Phil Martelli for a hat or a note with his autograph to brighten Lenny’s day. But Phil said that wouldn’t do. That wouldn’t do at all.

“What’s the room number?” he asked.

To the surprise of just about everyone, a few days later Phil Martelli walked into Lenny’s room. Lenny was startled this man he’d only seen on television before was suddenly in his hospital room. “I was just a 15 year old kid in the hospital,” he said. “I mentioned his name once and he came. I was shocked and amazed.”

Phil and the Martellis went about trying to figure out if they were related, climbing the branches of their family trees to no avail. They finally agreed that they were just complete strangers with the same last name who were there to do what they could to help a young man. Phil stayed for over an hour talking to Lenny about when he was going to get up.

Lenny remembers it clearly because Phil said “when.” Not “if”.

There was no “if” in Phil Martelli’s voice. There rarely is. There was something about Phil’s way of talking that was different from all the voices of doctors and nurses. Prognoses just sound different than faith. Statistical likelihoods sound nothing like inspiration. Phil told the young man he was going to get up and walk. That meant a lot—more than a lot.

In fact, before every game while his team warms up Phil prays in the silence of the locker room. He prays the rosary and a prayer on the back of a card he picked up at the funeral of his first basketball coach – a prayer to Saint Francis. He doesn’t pray to win the game—not ever. He prays that he’s done enough; enough to prepare his young men; enough to inspire them to be what perhaps even they didn’t know they could be.

Phil promised Lenny that day that when he was able to walk, he was going to walk out on the court with him for a game.

So that became Lenny’s goal. Lenny says now that Phil’s promise gave him something to strive for. “I think it was just that I was so tired of talking to doctors. It got to me,” he said in one news report.

Whatever it was, it was exactly what Lenny needed to hear. He never believed the doctors when they talked of him never walking again, but hearing Phil talk about him walking onto the court inspired him. Even when Lenny left the hospital, the two caps and shirt that Martelli gave him stayed on Lenny’s bedpost, reminding him of the goal.

Phil Martelli called often checking on Lenny’s progress. And Leti would call Phil on the milestone days when Lenny did something doctors thought he wouldn’t be able to do.

Phil said he is always humbled when asked to help people. “I honestly believe wholeheartedly that God has a reason and he has provided me the possibilities to make a difference and therefore I have a responsibility to make a difference,” he said. “I’m touched that my words and my people-coaching can pay dividends.”

He adds that the Martelli family gave him more than he gave them. “They were very loving,” said Phil. “Not to make a societal statement but our kids today are liked too much and need to be loved more.” He said the Martelli’s “unbelievable faith” and love for their children inspired him and that he’s the one who received a gift for being invited to the hospital room.

Faith in the Martelli family is strong. Someone had given Lenny a Padre Pio prayer card and “so we started to pray to Padre Pio every night,” said Leti. “And we blessed Len with Padre Pio oil every day.”

Leti didn’t eat or sleep while her son was in the ICU. Lenny’s Dad took care of their other children and Leti stayed right next to Lenny. To ask her to leave his bedside would’ve been like asking her to jump to the moon—impossible.

Lenny asked “now what do you want me to do?”

So he did. He walked all the way down the hallway. When he reached the end of the hallway, he turned and wondered to himself, “How did I get from there to here?”

Then he told everyone “I told you so” in that way that only a fifteen year old could. He said he told them he would walk and then he did. 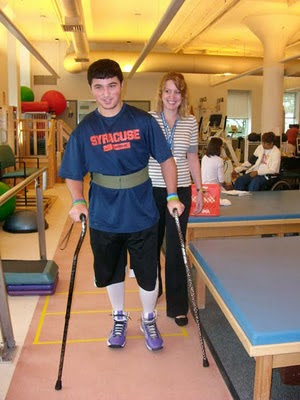 “I believe Padre Pio was with us,” said Leti.

But miracles are miracles and they don’t always get you across the finish line. Sometimes miracles just give you the strength to believe the impossible is possible. It still took Lenny fighting his body, forcing it to do things it couldn’t.

Some days just getting out of bed caused him to sweat and shake. But he did. Some days every step was uphill. Lenny knew that miracles take work. Hard work. Some days he knew, just knew that he wouldn’t be able to make it through a whole day of school at Pope John Paul II High School. But he did.

After saying his prayers, Phil met Lenny in the tunnel. He put his arm around him and told him he was proud of him. Leti was in the stands at the game surrounded by dozens of family and friends wearing t-shirts saying “LennyStrong.” She was worried because that morning, as she put it, “Lenny wasn’t having a good walking day.” She ran up to Lenny in the tunnel and told him to say a prayer. He did. 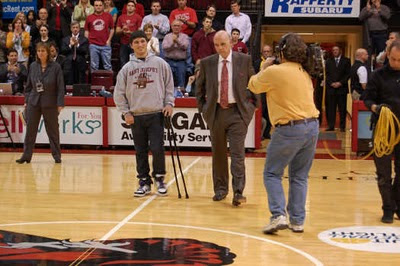 Phil and Lenny walked out onto the court together. Phil walked out to center court and then stepped out of the way of the cameras, turned, and applauded Lenny. Even the Xavier team stopped what they were doing to applaud Lenny. It was a Xavier player who pointed out a 40 foot long banner to Lenny that students at Saint Joe’s had made saying “Welcome Lenny, You’re Striding Towards Greatness.”

It had been exactly a year and a day since Lenny lay in the snow, his body broken, saying, “I can’t move.” It was a rebuilding year in which a complete stranger’s kindness and a mother’s love inspired a miracle that slipped through the tiny space between slim and none.

The 84-year-old woman from Lake Odessa was speaking about Proposal 3, a proposed state constitutional amendment that would advance abortion.

The Office for Catholic Mental Health Ministry is set to open in January 2023.

At any moment the clouds could open wide, unleashing the judgment of the Lord upon us. Be vigilant.

This Is the First Stage of Contemplation According to Saint Bernard, Lydia Bertrand Conversion Story, and More Great Links!

An American Priest in Togo

Father William Ryan is optimistic for the future of the Church in Togo, which is now sending priests to serve as missionaries in France, the country’s former colonial ruler.