That "Olympic Moment" Was a Christian Moment

By now, we've all probably seen that beautiful moment when Abbey D'Agostino of the United States collided with Nikki Hamblin of New Zealand in a women's 5000m qualifying race. In what is being heralded as "true Olympic spirit", D'Agostino jumped back on her feet and appeared ready to race on. This is the Olympics, mind you. But then she looked down and saw her rival from New Zealand, writing in pain.

Then she did the unthinkable—she stopped. She stopped and helped her opponent up. Hamblin later described it this way in Christianity Today:

"That girl is the Olympic spirit right there," Hamblin said of D'Agostino. "I went down and I was like 'What's happening? Why am I on the ground?' "Then suddenly this hand on my shoulder, like 'Get up, get up, we have to finish this' and I was like 'Yep, yep, you're right. This is the Olympic games – we have to finish this.' "I've never met this girl before, and isn't that just so amazing?"

Hamblin continued: "Regardless of the race and the result on the board, that's a moment that you're never, ever going to forget. The rest of your life, it's going to be that girl shaking my shoulder, like 'Come on, get up'." Hamblin later told a New Zealand radio station: "When I look back on Rio 2016, I'm not going to remember where I finished, I'm not going to remember my time... but I'll always remember that moment."

After D'Agostino helped Hamblin up the two started together, but it turned out that D'Agostino was the one who had done terrible damage to her leg. Her ACL was torn. The two hobbled on. They finished 29th and 30th and embraced just past the finish line.

Abbey was quoted as saying:

Although my actions were instinctual at that moment, the only way I can and have rationalized it is that God prepared my heart to respond that way,” she said in a statement.

“This whole time here he's made clear to me that my experience in Rio was going to be about more than my race performance — and as soon as Nikki got up I knew that was it.”

... I know there's often criticism of athletes praying before a competition, or thanking God for their victory. I like to think this is why we should pray before a sporting event. Not that God will favor us with victory, but that we will be aware of His presence and have the Grace do what He would have us do.

I truly believe the world is thirsting and starving for Christ. And one amazing and loving act of Christianity can change hearts. It can change everything. What Abbey did touches the world. Just look at the New York Post cover yesterday: 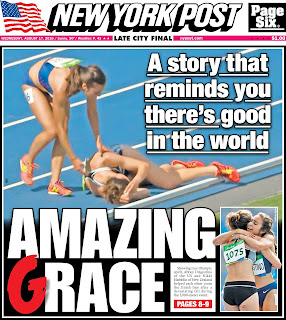 In June of this year, Abbey tweeted out this message which foreshadows this incident quite well, if you ask me:

Thursday thoughts: Pressing forward means looking behind with a smile and with compassion. PS:… https://t.co/qQ1iAwbXtY

Known as SB2, the legislation provides for a tax exemption for an adopted child, cuts the state’s tax on children’s diapers, caps the gas tax, and increases the adoption tax credit.