Pamela Anderson Playing the Virgin Mary Says It All

Pamela Anderson, the silicon enhanced sex tape star and Playboy centerfold, will be playing the Virgin Mary in a sketch comedy show that will appear on the Comedy Network and in Canada. 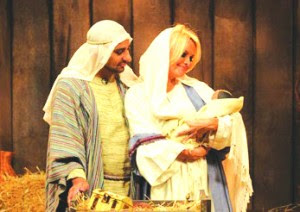 Anderson will play the mother of Jesus opposite comedian Russell Peter Joseph in a mock manger scene in a comedy sketch Christmas special. CTV described the special as Peters’ “irreverent twist” on the Christmas special.

But I have to wonder—what’s the twist? There’s no twist to irreverence anymore. It’s been done and overdone.

Irreverence is so commonplace that it’s now the norm.

Honestly, how is it an “irreverent twist” when nobody’s making reverent Christmas specials anymore? You want to shock us, show a little reverence.

But I fear that too many of us have forgotten how to feel or show reverence. It’s not so much that we’ve forgotten how to worship, it’s just that we’re worshiping all the wrong things. So taken are we with our own hip detachment and sophistication, we’ve become an entire generation that doesn’t smile. We smirk. There’s a difference.

Ours is a culture of cynicism, chasing the ever-elusive cool. Everything must have an ironic twist to it or else it’s seen as too open and honest and must immediately be mocked by eye rolls, smirks and sneers.

We’ve become a culture of too-cool posers sprawled out in the bleachers, our lids half open to show how little we care. We worship irony and feign detachment while our souls cry out secretly to be anything but detached. We yearn for our lids to be opened in amazement. We want nothing more than to stop posing and kneel in reverence, but we’re afraid to show it. We’re afraid to build for fear of our creation being mocked.

I believe civilizations go through periods of construction and deconstruction. We’ve so completely deconstructed everything that nothing but the bleachers are left standing. I think it’s time to rebuild. To heck with cool.

Let’s stop rolling our eyes and look up to Heaven. Let’s not be cynical and maybe believe the best in people even when experience says different. Let’s not be sarcastic, let’s try honest. Don’t smirk, just smile. And let’s try a little reverence.

Let’s get out of the bleachers and onto our knees.