One, he didn’t do it. Two, it wouldn’t be such a great thing if he had.

Today is the feast day of St. Nicholas, original inspiration of Santa Claus or Father Christmas, and beloved figure of irascible social-media memes celebrating the famous incident in which the good bishop, attending the Council of Nicea, became so enraged at Arius’s blasphemies that he struck him.

Some of these memes are pretty funny, I’ll admit. Here’s a funny music video [edit: the video isn’t available any more, but the lyrics are still up at the linked site] that gets extra points for including the story about the saint being thrown in jail for his shocking act (though it loses points for some sloppy meter).

These memes are funny for a number of reasons: the striking contrast (no pun intended) to the jolly, indulgent image of Santa Claus, to the decorum and forbearance most people expect of bishops and saints, and to the spirit of tolerance and dialogue advocated in our own times.

In this era of safe spaces, trigger warnings and microaggressions, many people find tough-talking and even hard-hitting honesty refreshing and welcome. The image of St. Nicholas punching Arius is appealing to many because it’s so patently politically incorrect — a rebuke, in the eyes of some Catholics, to what they disparagingly call the “Church of Nice.”

There are some problems with the story, though.

In the first place, it’s not true. The story has no historical value.

As the old Catholic Encyclopedia notes, it’s doubtful St. Nicholas was even at Nicea, since the historical lists of bishops that attended that council don’t include him. Instead, Nicholas is linked to the Council by much later hagiographical works written over half a millennium after Nicholas died.

According to Roger Pearse, editor of the Tertullian Project, the account of the violent incident at Nicea apparently shows up first over a thousand years after the Council, in a 14th-century work.

Even then, it isn’t Arius himself that Nicholas supposedly struck, but only “a certain Arian.” That story wasn’t good enough, though, so a couple of centuries later another writer changed it to Arius himself.

Note, too, that the medieval accounts have Nicholas slapping — not punching — the heretic. The story describes a medicinal slap or a rebuke, an attempt to “slap him back to his senses” rather than an expression of contempt or a wish to harm, as a punch certainly would be.

Be that as it may, in the original story the blow is not celebrated as a high point of the Council. On the contrary, for striking the Arian heretic, Nicholas was reportedly deprived of his mitre and pallium.

The later story, which changes the heretic to Arius, also ramps up Nicholas’s punishment, having him thrown into jail — and has him vindicated by no less than Our Lord and Our Lady, who appear to Nicholas in prison and, hearing that his has been imprisoned “for loving You,” free him of his fetters and clothe him in an archpriestly vestment, to the astonishment of those who come for him in the morning.

Be that as it may, it’s perilously easy to embrace this irascible anecdote as cover for irascible tendencies on our own parts for which we would certainly not be vindicated by Our Lord and Our Lady.

It’s like how some people are so enamored of the story of Jesus’ cleansing of the Temple that in their minds that one story moots all the stuff Jesus and the Bible have to say about loving and praying for your enemies, turning the other cheek, etc. (Mt 5:38–45), overcoming evil with good (Rom 12:21), being gentle and not violent (1 Tim 3:3), not being quick-tempered or pugnacious (Titus 1:7), a soft answer turning away wrath (Prov 15:1), etc. 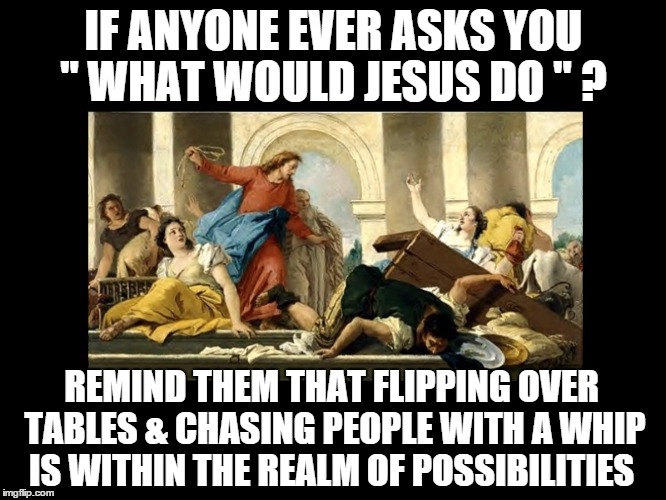 Getting mad at people we disagree with and attacking them with words, if not with fists, is easy. Patience, gentleness and understanding are hard.

Those Catholics who complain about the “Church of Nice” may have a point, but there’s a danger of pressing the point too far. The danger is that the effort to anathematize the Church of Nice may lead to worshiping at the Church of Not Nice. This is not an improvement.

I don’t want to be a total Scrooge about the Arius memes. After all, I shared one above. And, as G.K. Chesterton says, “A good joke is the one ultimate and sacred thing which cannot be criticized.”

But I think some jokes can be laughed at only with a sense of cognitive dissonance. What makes this joke funny is partly that this is not a model of how we should treat those we disagree with, literally or figuratively.

Deacon Steven D. Greydanus Deacon Steven D. Greydanus is film critic for the National Catholic Register, creator of Decent Films, a permanent deacon in the Archdiocese of Newark, and a member of the New York Film Critics Circle. For 10 years he co-hosted the Gabriel Award–winning cable TV show “Reel Faith” for New Evangelization Television. Steven has degrees in media arts and religious studies, and has contributed several entries to the New Catholic Encyclopedia, including “The Church and Film” and a number of filmmaker biographies. He has also written about film for the Encyclopedia of Catholic Social Thought, Social Science, and Social Policy. He has a BFA in Media Arts from the School of Visual Arts in New York, an MA in Religious Studies from St. Charles Borromeo Seminary in Overbrook, PA, and an MA in Theology from Immaculate Conception Seminary at Seton Hall University in South Orange, NJ. Steven’s writing for the Register has been recognized many times by the Catholic Press Association Awards, with first-place wins in 2017 and 2016 and second-place wins in 2019 and 2015. Steven and his wife Suzanne have seven children.

What as a child we saw dimly, in natural fantasies, we should see as an adult

He Said What?? Bishop Sparks Backlash Over Santa Claus Comments

The Diocese of Noto’s communications manager wrote in a statement posted to Facebook Dec. 9, that, “on behalf of the bishop, I express my sorrow for this declaration which has generated disappointment in little ones.”

Wolfgang Georg Kimmig-Liebe, who travels around the world dressed as the fourth-century bishop, was greeted warmly by the crowd at Wednesday’s general audience.

The girl’s phone, which has a video recording of her death, is in the hands of law enforcement.