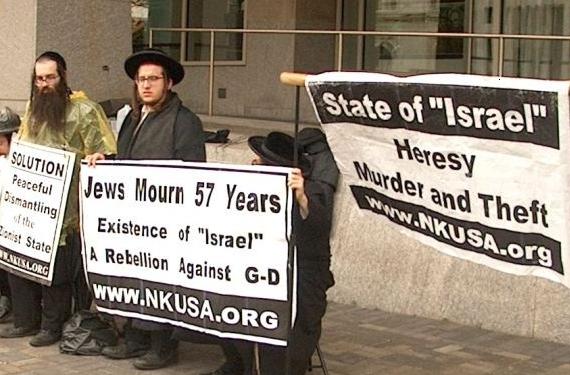 Recently we were discussing the recent Helen Thomas broujaja and the question of who “owns” the land of Israel/Palestine inevitably arose.

I’m not going to solve that long-standing and thorny question in this blog post, but I can offer some considerations that need to be taken into account when forming an opinion on the subject.

First let me note that there is room for different opinions, here. The issue is a complex one, and people of good will can take different positions—regarding the founding of the modern state of Israel, regarding its role in God’s plan, and regarding what should happen with it in the future.

In previous comboxes, some readers asserted that support for Zionism is so important that opposition to Zionism makes ipso facto one an anti-Semite. This claim is etymologically ironic in that many of the non-Jewish inhabitants of Palestine are, in fact, Semites, but even allowing for this irony, it is simply note true. Zionism has been and remains controversial within the Jewish community itself.

Note that one can be a Zionist in one sense but not the other. One could be a Zionist in sense (2) only and hold that, while the modern state of Israel should not have been created, now that it has been, it has a right to defend itself and to continue to exist. On the other hand, one could be a Zionist in sense (1) only and hold—for example—that, while it was right to create the modern state of Israel, that state has morally forfeited its right to exist due to human rights violations or that while it may have been right to found the state of Israel in the 20th century, if unstable Arab states start getting nukes and a regional nuclear war is about to start then the best thing for the welfare of the Jewish people would be to leave the region.

Many Jewish people today are Zionists in both sense (1) and sense (2), though not all. There are quite a number who are sense (2) only Zionists, and the even-more-nuclear-future could give rise to a significant number of sense (1) only Zionists.

Some Jewish people are Zionists in neither sense (1) nor sense (2). This is the case, for example, with the gentlemen pictured, who are members of Neturei Karta, who hold a view that was quite common among Orthodox Jews prior to the founding of Israel.

This view is that the Jewish people should not try to control the land of Palestine on their own and that they should regain statehood there only through the coming and the actions of the Messiah. Trying to take control of Palestine prior to that point, on this view, constitutes a usurpation of God’s plan and is viewed as a violation of the three oaths held to regulate relations between the Jewish people and the nations during the present age.

Neturei Karta is by no means the only Jewish group holding this view, BTW.

These people are not anti-Semites. They don’t even deny that the Jewish people have a special title to the land of Palestine. They simply see the legitimate control of this land as an eschatological reality that should not be confused with contemporary Zionist aspirations.

I thus hope that the difference between anti-Zionism and anti-Semitism is a little more clear and that we can discuss the issue without people wanting to automatically play the anti-Semitism card.

That said: Who owns the land?

Many here in America have reflexively treated the prophetic aspect of the question as unambiguous and definitive: God promised Israel the land in the Old Testament, and so it’s theirs. Case closed.

But prophesy often is not so straightforward in its interpretation or application. God also made it clear that, if Israel committed certain sins—or sins of a certain character and magnitude—that it would be dispossessed of its land, at least for periods of time. And there are passages warning the Jewish people to submit to their conquerors and that they will not be restored to the land for a set time and things like that.

There is also the question of the way in which many Old Testament prophesies have found fulfillment through Christ in ways that would not have been expected previously. The impact that this phenomenon has on the promises regarding the land is something that cannot be ignored.

For its part, the Catholic Church acknowledges that the Jewish people still have a special role in God’s plan. That’s something I’ve written about before. But the Church does not teach that the Jewish people have a right to possess the land of the modern state of Israel in the present day by divine promise. In fact, the Holy See has studiously avoided saying that.

It has even gone so far, in its 1993 Fundamental Agreement with Israel, to state:

The Holy See, while maintaining in every case the right to exercise its moral and spiritual teaching-office, deems it opportune to recall that, owing to its own character, it is solemnly committed to remaining a stranger to all merely temporal conflicts, which principle applies specifically to disputed territories and unsettled borders [art. 11:2].

In its specific application, this passage is referring to disputed territories like the West Bank and Gaza rather than to the territory of Israel as a whole, but the same principle applies in general. The Holy See treats the question of what people have title to what territory as a temporal affair and thus something that goes beyond the Church’s purview. The Church can certainly raise moral objections to various courses of action, like trying to forcibly kick out the people who currently have title to a territory. But the question of who has title is treated as a temporal rather than theological issue. The Church does not hold that any particular people has an immutable divine right to a particular territory.

This is not to say that a Catholic could not hold that Israel does have a right to the land in the present day due to God’s promise. That is an opinion within the realm of permitted theological speculation. But it is not something the Church has signed off on. The Church has remained conspicuously neutral on that theological question as it applies in our age.

This deals with the subject from the prophetic perspective. What about the ethical one?

That will be the subject of our next post.

In the meantime: What are your thoughts?

On Prophets And Pearl-Clutchers, New Pre-Ordinariate Church Flourishes In North Carolina, And More!

As is the Vatican custom, Pompeo will meet with his Vatican counterpart, Secretary of State Cardinal Pietro Parolin.

Kelly Branaman, secretary for Catholic schools and superintendent of schools for the Archdiocese of Washington, said that she was “appreciative” that non-public schools were recognized as well as public schools.

From 1994 to 2011, Archbishop Brown worked at the Congregation for the Doctrine of the Faith, and he was appointed apostolic nuncio to Ireland in November 2011.

On Prophets And Pearl-Clutchers, New Pre-Ordinariate Church Flourishes In North Carolina, And More!

As is the Vatican custom, Pompeo will meet with his Vatican counterpart, Secretary of State Cardinal Pietro Parolin.

Religious Freedom Is On Your Ballot

Cardinal Pell to Return to Rome This Week

EWTN Novena to the Mother of God for the United States

It Is High-Time to Ditch The “Hippie Jesus” Image, The Prince Of This World, And More!

Preaching and the Election: How Not to Get in Trouble but Still Be Effective