How Much Freedom of Religion Do You Have? 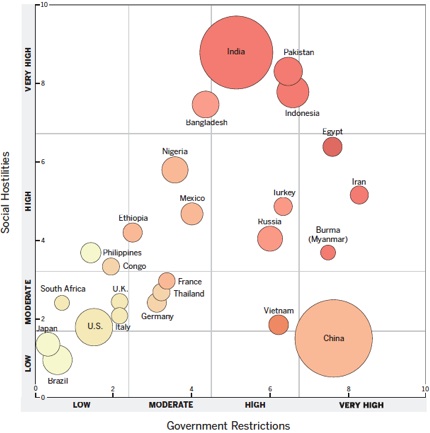 This is a chart showing the fifty largest countries by population and the religious freedom they offer.

The chart was prepared by the Pew Forum, and it measures religious freedom along two axes. The first—the horizontal axis—is the amount of freedom allowed by law, with the most freedom on the left and the least freedom on the right.

The second—the vertical axis—is the amount of freedom allowed culturally (i.e., how much social hostility you are likely to meet apart from the law), with the most freedom at the bottom and the least freedom at the top.

The size of the circles represents the number of people living in the country.

When I first saw this, several questions occurred to me.

One was: “Where is Saudia Arabia? It ought to be in the extreme top right of the diagram.” The answer is that it’s not one of the top fifty countries by population, so it’s not on the chart. However, in the Pew Forum report that the chart is based on, Saudi Arabia is the only country listed in the “very high” category for both social hostilities (6.8) and government restrictions (8.4) to freedom of religion.

Another question was: “Why is the U.S. ranked the way it is?” It turns out that the government restrictions score the U.S. has (1.6) includes the fact that it requires religious organizations to apply for a special status (c3 non-profit) to obtain tax-exempt status, and there are strings attached to that (e.g., limits on what pastors can say about politics).

I’m less sure about the social hostility score the U.S. is given (1.9). Certainly there are people in the U.S. who are hostile to different religions, and there are even crimes committed against people because of their religion, but I’m not sure that the Pew researchers have ranked things properly.

If you look in the full report, the U.S. is classed as having “moderate” social hostilities toward freedom of religion, with an overall score of 1.9. The Pew report justifies this by saying: “In the United States, law enforcement officials across the country reported to the FBI at least 1,400 hate crimes involving religion in 2006 and again in 2007.”

Okay . . . but it then immediately says that Belgium is a country with “low social hostilities” (it’s score is 1.3) and justifies that by stating: “In Belgium, for example, 68 anti-Semitic incidents were reported in 2007 and 31 in the first half of 2008, but none involved physical violence.”

That’s not looking so different than the U.S. It may be looking even worse.

You could fix on the phrase “but none involved physical violence” to explain the difference in rankings. Presumably some U.S. incidents did include physical violence, but many no doubt did not (e.g., spraying anti-religious graffiti on churches or synagogues). And if you scaled Belgium up by a factor of 30, you might get some physical violence appearing as well.

In any event, I suspect that the ranking here is something of an apples-to-oranges comparison that has more to do with how the two governments classify, report, and track such incidents.

Your thoughts on the state of freedom of religion—here or abroad?

Denton, a rising senior at the university, was removed from his position as head of the university’s student senate in early June over remarks he made in a chat forum of the school’s Catholic student union in late May.

The return of the Confraternity New Testament in new editions is welcome in the evolution of the Catholic English Bible and biblical scholarship.

Pompeo: Nowhere is Religious Freedom More Under Assault Than in China

The U.S. Secretary of State’s remarks at a religious freedom symposium came a day before he is expected to meet with Cardinal Pietro Parolin at the Vatican to discuss the renewal of the Holy See’s provisional accord with China.

Why Cardinal Pell Is Vindicated by Cardinal Becciu’s Firing

Cardinal Pell Returns to Rome, as Legal Proceedings Against Cardinal Becciu Are Being Organized