I wish I could give a cogent and well thought out treatise on the election of Pope Francis I, hereby and forever dubbed PF1 ( You heard it here first.) But I can't, just as nobody else can. So instead of well-thought out, I give impressions, worries, and even a few thoughts.

First thought. Pope seems like a simple and humble man. I wish I was more like him.

In a time that seems to call for a fair amount of skull-cap cracking, his resume does not jump to the top of the pile. But by no means does that mean he is not up to the task. Bruce Willis didn't send any Euro-weenie bad guys to their well deserved demise until they put him in a spot where he had no choice.

Fr. Longenecker reports that PF1's visit to the tomb of St. Pius V may signal that PF1 is ready to do what needs doing.

The very first thing Francis does is go to St Mary Major to pray at the tomb of Pius V.

So who was Pope St Pius V? He was a reforming pope who reigned from 1566- 1572. He cleaned up the curia, excommunicated heretical bishops, cleaned up the immorality in the church and swept the church clean– paving the way for the great surge in the church we call the Counter Reformation. He also excommunicated the tyrant Elizabeth I of England and formed the Holy League–a confederation of Catholic armies which eventually defeated the Ottoman Empire at the Battle of Lepanto. Pius V also instituted the Feast of Our Lady of Victories (nor the feast of Our Lady of the Rosary).

All joking aside, for some reason the Cardinals thought that this mild-mannered man from Argentina would take the broom to the place. Hebemus problems, PF1, so I hope they are right.


Some say his is liturgical sensibilities seem akin to Hasselhof's cheeseburger etiquette, it ain't pretty. A low Mass Pope is a real downer and you don't have to be a rad-trad to think so.

I suppose the best one can hope for a Jesuit in matters liturgical is that they refrain from putting a boombox in the Sistine Chapel wafting John Michael Talbot as he sways side to side with his eyes closed. Based upon that expectation, PF1 seems alright. Even if he will not advance the cause, I pray he won't set it back. (Father Z. reports a hopeful sign in this regard-albeit in Spanish.)

Speaking of Jesuits, a round-up of some of the things heard on the interwebs...

Doesn't being a Jesuit Pope bring self-loathing to a new level?

Conclave locates the one Jesuit completely loyal to the Pope! 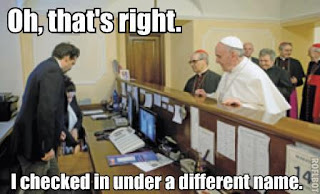