A website opposing the candidacy of Mark Miloscia, a pro-life Catholic, may just be the most vehemently anti-Catholic political attack you've seen this election season.

Thus far, it's uncertain who created the site, but it's certainly from those opposing the Republican state senate candidate. 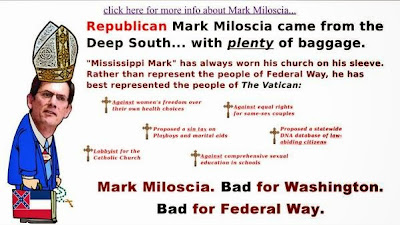 Interestingly, Miloscia switched from Democrat to Republican precisely because he felt that religious people were no longer welcome in the Democrat party. It appears to be growing increasingly difficult to argue with that.

We're getting to the point where this can hardly be called surprising. Radical Muslims are slaughtering Christians in many parts of the globe but it's hardly worth the raise of an eyebrow or a headline. The federal government is forcing religious institutions to provide abortifacient coverage to employees. The state of California is forcing everyone, including religious institutions, to provide coverage for abortion. The Church is constantly named as the main antagonists in the seemingly never ending "War on Women." Christian store owners are forced to accept the position that losing one's faith is the cost of doing business.

So even if this website is the creation of one man who is unaffiliated with a candidate opposing Miloscia it fits in quite neatly with the tenor of the times.