This is an old Mohawk blessing. Pronounced She:kon (Say go) Skennon ko:wa (Skennin go wah), it means Hello, Great Peace be with you!

I could almost hear Saint Kateri Tekakwitha saying those words to me as I visited her shrine in Fonda, New York

My stop at the National Saint Kateri Shrine was the tail end of my trip to New York to visit Our Lady of the Martyrs Shrine and Saints of Auriesville Museum. Because of time constraints and inclement weather, I almost missed it. I’m so glad I made it!

Kateri was an Algonquin-Mohawk maiden born around 1656 in Ossernenon (Auriesville, New York) — the site on which three of the eight North American Martyrs (Isaac Jogues, Rene Goupil and John LaLande) lost their lives. She was the daughter of a Mohawk chief and Tagaskouita, a Catholic Algonquin woman, who had been captured and adopted into the tribe. Kateri’s mother had been baptized and educated by near what is now Montreal, Canada. Kateri has one sibling, a younger brother.

When she was around 4 years old, her family succumbed to the smallpox epidemic. Kateri suffered smallpox, which left her face scarred and her eyesight impaired. Both of her parents and her baby brother died from the scourge. Alone in the world, Kateri was adopted by her father’s sister and her husband, another Mohawk chief. Soon after, the smallpox survivors of Ossernenon left the decimated village and built a new one a mile or two west along the southern bank of the Mohawk River. They called it Caughnwaga, or At the Wild Water in Mohawk.

Conflict over the fur trade led to an attack by the French, who drove the Mohawk from their homes and burned down all three villages in the region. Left with nothing, the Mohawks were forced into a peace treaty with the French, a condition of which as to accept Jesuit missionaries into their villages. In time, many of the Mohawks were converted and came to love the Catholic faith. They rebuilt Caughnwaga on the north bank of the river,

At age 19, she converted to Catholicism, was baptized and renamed Kateri (Mohawk for Catherine) in honor of St. Catherine of Sienna. Tekakwitha is the name given to her by her tribe and it means, “she who bumps into things.” Kateri took a vow of virginity and kept it faithfully. The persecution continued and after six months and under the advice of the Jesuits, Kateri went to live in the Christian Mohawk village of Kahnawake, located south of Montreal on the St. Lawrence River. She stayed there the remaining two years of her life, all the while practicing harsh penance and self-mortification for love of Jesus. This caused her health to fail, and she died at the age of 23 or 24.

Witnesses say that minutes after her death, Kateri’s scars disappeared and she became radiant and beautiful. There are reports of her appearing to three different individuals in the weeks following her death. In one instance, Kateri appeared kneeling and holding a wooden cross that shone like the sun. In another, a knock on the wall awakened a sleeping woman. She heard Kateri’s voice asking if she was awake and then Kateri said, "I’ve come to say goodbye; I’m on my way to heaven."

Accounts of the Jesuits show Kateri to have been a modest girl who avoided social gatherings. She covered her head with a blanket to hide the smallpox scars. She became skilled at traditional women’s arts such as making clothing and belts from animal skins, weaving mats and baskets from reeds and grasses, cooking dishes made from game, crops and gathered produce. She participated in the seasonal planting of the women and the weeding of the gardens as they grew. Although frequently prodded by relatives, she refused even to consider marriage. Her gravestone reads, “The fairest flower that ever bloomed among red men.”

The place where Kateri lived most of her life — Caughnawaga — was marked in 1938. The village itself was discovered in 1950 by Father Thomas Grassman, a Conventual Franciscan and founder of the shrine. Between then and 1957, the Conventual Franciscans and numerous volunteers excavated the site. Today it’s the only completely excavated Iroquois village in the United States.

Visitors can view the outlines of the village’s 12 longhouses and stockade. Nearby is “Kateri’s Spring” from where the water for her baptism was drawn. Many have claimed cures through the waters of that spring, which still flows. The museum and chapel are housed in a 200-year-old barn renovated by Father Grassman in 1938. The upper floor holds a replica of the chapel of St. Peter in which Kateri was baptized. The lower floor contains an impressive museum with a display of Native American artifacts and particularly ones of the Iroquois nation. The property became a shrine in 1980 after Kateri was called Blessed by Pope John Paul II and allowed to be officially venerated. She was canonized in 2012.

For more information about the National Saint Kateri Tekakwitha Shrine and to plan your trip, visit http://www.katerishrine.com/. 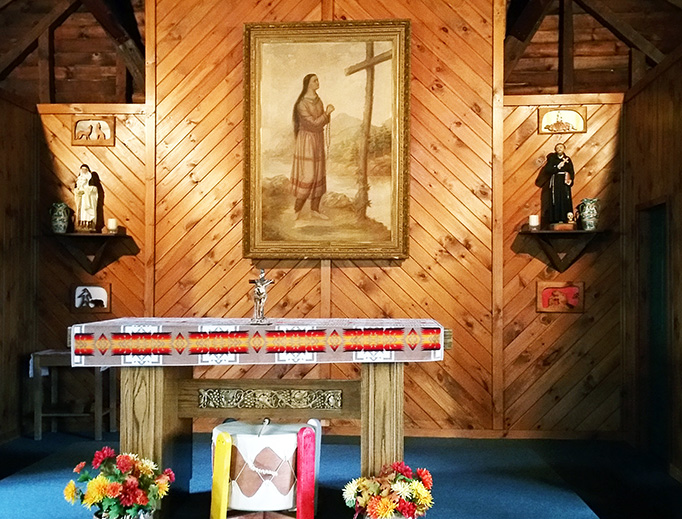 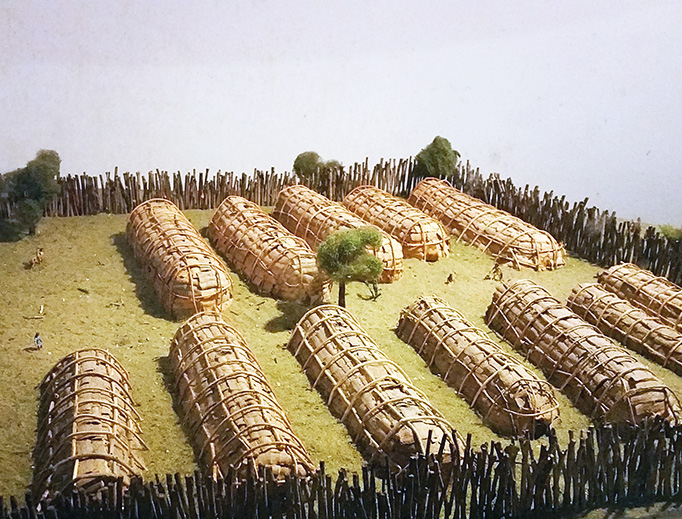 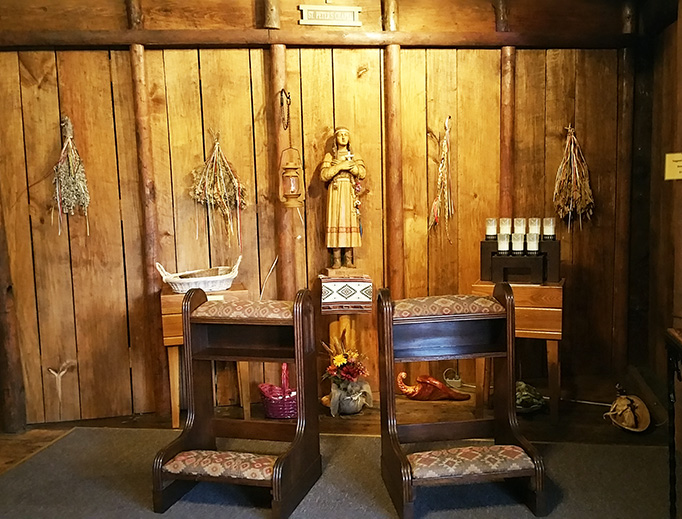 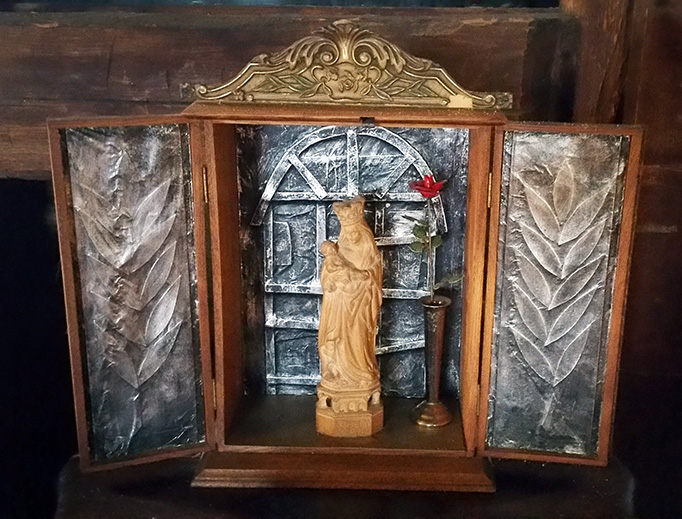 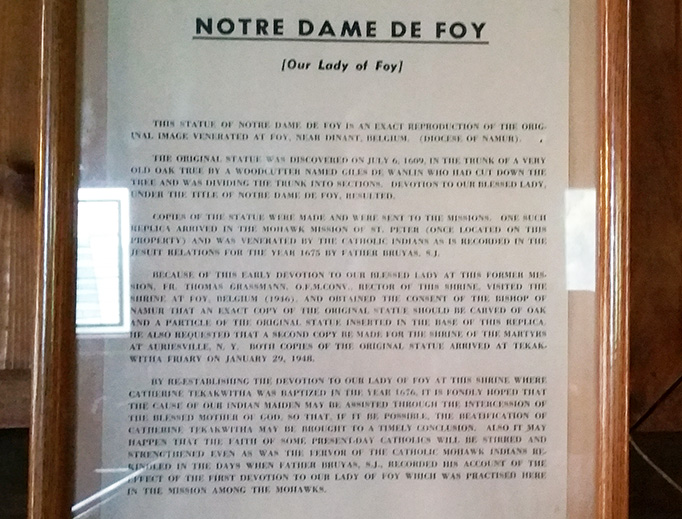 This article originally appeared Feb. 19, 2018, at the Register.

Marge Fenelon Marge Fenelon is an award-winning Catholic author and journalist, blogger, and speaker. She’s a long-time correspondent for National Catholic Register, and the author of several books on Marian devotion and Catholic family life. She’s also a weekly contributor to Relevant Radio’s “Morning Air Show” and a popular guest on several other Catholic radio and television shows. Marge is an instructor for the Archdiocese of Milwaukee Deacon Wives Program.

Canadian Andre Prevost’s First Nations series is helping Catholics to pray with the living roots of the Church in North America.

10 Amazing Things You Need to Know about St. Kateri Tekakwitha

St. Kateri Tekakwitha is one of the most amazing saints of North America, but most people have yet to meet the real St. Kateri and how she traveled the path of holiness through her own culture and times.

Visit the School of Courage in the US This Summer

COMMENTARY: There’s no better place in the United States to be formed in courage than the Shrine of Our Lady of Martyrs in Auriesville, New York.

EDITORIAL: The pro-life movement’s legislative successes remain fragile and reversible without bringing about the profound cultural conversion necessary to sustain them.