Cause Opens for Nicholas Black Elk, Holy Man of the Lakota

Bishop Robert Gruss tells the Register that Black Elk’s life provides a model of ‘missionary evangelization’ for all Catholic Americans.

PINE RIDGE, S.D. — Basil Brave Heart remembers the day his father pointed him to the great Lakota holy man and Catholic catechist, Nicholas Black Elk, whose cause for canonization was formally opened Saturday by the Diocese of Rapid City, South Dakota.

At a potato farm in Scottsbluff, Nebraska, Brave Heart’s family was working on one row that seemed to stretch as far as the eye could see. Black Elk and his family were working on the next row and had stopped to quench their thirst.

“He said to me in Lakota, ‘The man that’s standing over there: That’s Black Elk,’” Brave Heart told the Register.

Black Elk made a deep impression on Brave Heart as a young Lakota boy. He watched as the Oglala Lakota “holy man” and devout Catholic worked with his family. Brave Heart recalled he was a “very humble man” and “very soft-spoken,” but had a great spiritual dignity about him.

“I’m very supportive of this canonization,” he said. “And I pray that others support this, too.”

Nicholas Black Elk (1863-1950) is most widely known thanks to Black Elk Speaks, John G. Neihardt’s English-language biographical work that covers his life up to his early 20s and focuses on the Lakota way of life that Black Elk had lived in his youth.

The famous book, however, leaves out the vast majority of how Nicholas Black Elk, who embraced the Catholic faith in 1904, recounted his life to Neihardt in the 1930s. Black Elk became an energetic Catholic catechist, retaining those Lakota practices that harmonized with his Catholic faith. He shared the Gospel to Native and non-Native people, often using his Two Roads pictorial catechism, until his death Aug. 17, 1950.

“Whatever vision he had as a youth, it was so influenced over the years by his life as a catechist, that the vision and his Catholic life became one life-inspiration,” Father Steltenkamp said.

According to Jesuit and Lakota witnesses Father Steltenkamp personally interviewed, Black Elk predicted that God would give them a sign at his death. They testified that on the nights between his death and his funeral, the sky seemed nearly bright as day, filled with a spectacular displays of falling lights — “like a water fountain with lights splashing,” one Jesuit told him. Other secular observers confirmed what they saw. Even contemporary journals across North America noted the event, calling it a very unusual aurora borealis. One priest who knew Nicholas Black Elk told him: “It was as if heaven was celebrating the arrival of old Nick. All of us thought something was different that night.”

Lakota elder John Lone Goose had told Father Steltenkamp that many people felt afraid watching this take place over the Pine Ridge reservation because no one had ever seen the sky filled with “miracle-like” light, but they also felt peace. He added, “Maybe the Holy Spirit shined on [Black Elk] because he was such a holy man.”

Bishop Gruss told the Register that Black Elk models the very kind of “missionary discipleship” that Pope Francis is calling the lay faithful to embrace as part of their own path of holiness. Black Elk, as a Catholic husband, father, grandfather and elder, became an energetic catechist who brought 400 people to Jesus Christ during his lifetime.

“His holiness of life is a great model for what is not only possible, but is how lay Catholics, Native and non-Native alike, are called to live and share their faith even in the most challenging times we all face in the world today.”

Bishop Gruss said that for Native American people, Black Elk provides “an icon who reveals what God has called all of us to be — people of faith and hope and a source of hope for others.”

He said Black Elk also strengthened the bonds between Native Americans and European Americans, “promoting the message of Jesus Christ as love, peace and harmony,” and he showed how Native American culture could enrich the Body of Christ.

“One of the great challenges among many Lakota Native Americans today is how to be both Lakota and Catholic,” the bishop said. “Nicholas Black Elk was able to do both and taught others to do both. He could integrate the two traditions, thereby bringing a richness to both.”

Bill White, a Lakota deacon candidate, was appointed the postulator for Black Elk’s cause. He said the big task ahead for him would be compiling all the archived documentation and interviewing witnesses to help get Nicholas Black Elk to the next stage of the canonization process, where his heroic virtues would be officially recognized and when he would be declared “Venerable.” The following stage of beatification would then require a verified miracle attributed to Black Elk’s intercession, with another miracle required for canonization.

“[Black Elk] pretty much devoted his whole life to Christianity and building up the world,” White said.

He added that Black Elk provides a witness of how to live a deeply Catholic life in accordance with one’s cultural tradition. He said the Lakota are spiritual people and traditionally would “pray throughout the day just like a priest would with his [Divine] Office.”

While retaining many such Lakota customs, Black Elk would attend Mass and receive Holy Communion as frequently as he could. He also would pray with the Lakota pipe and the rosary, and he was often seen with both in his hands. 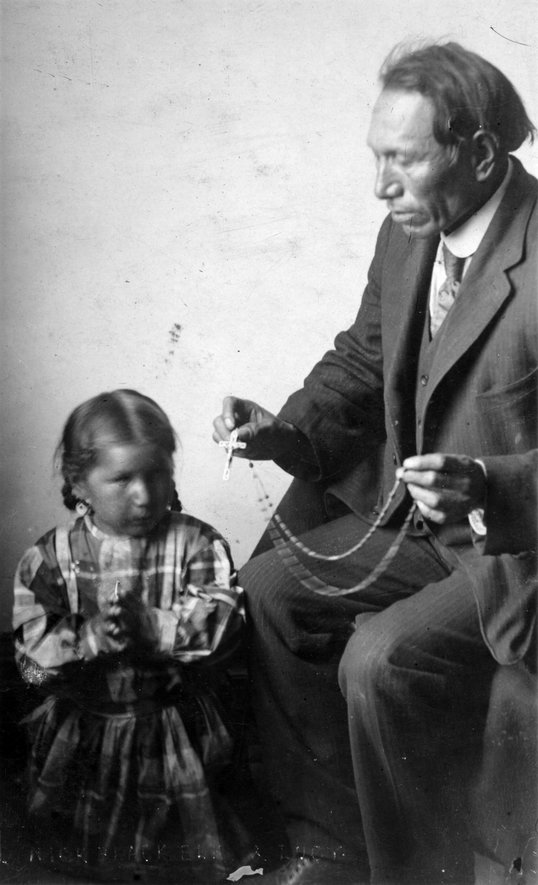 “It is pretty apparent that when the Jesus story came to the Lakota people, it resonated with them,” Father Steltenkamp said.

He added that many of the first Lakota became Catholic, as Nicholas Black Elk did, because they saw so many parallels in their spirituality with Christian revelation.

“The transition was an easy one for the old-timers,” he said. “They could see the connections of Jesus being the special revelation of God.”

In a 1984 address to Native Americans gathered at the Martyrs’ Shrine in Midland, Canada, Pope St. John Paul II said Native Catholics have enriched the Body of Christ because they have been able “to bring forth from their own living tradition original expressions of Christian life, celebration and thought,” indicating their fidelity to their culture and heritage benefited the Church and the world.

“Through his Gospel, Christ confirms the native peoples in their belief in God, their awareness of his presence, their ability to discover him in creation, their dependence on him, their desire to worship him, their sense of gratitude for the land, their responsible stewardship of the earth, their reverence for all his great works, their respect for their elders,” he said. “The world needs to see these values — and so many more that they possess — pursued in the life of the community and made incarnate in a whole people.”

Just a year into proclaiming the need for a New Evangelization, John Paul II had also pointed out that the lay 17th-century Huron-Wendat evangelist Joseph Chiwatenhwa and his family provided the Church with “eloquent models of lay ministry” and an example of heroic witness to the faith.

Both Chiwatenhwa and Black Elk worked closely with the Jesuits as evangelizers, and both recognized the central insight — affirmed by St. John Paul II — that the Catholic faith’s revelation of Jesus Christ affirmed and uplifted the “authentic values and customs” of their ancestors who revered the Creator and his creation.

The federal government’s renaming of Harney Peak in the Black Hills to Black Elk Peak in August 2016 brought fresh attention to the life of Black Elk — but also shed a light on the fact that the Oglala Lakota holy man was also a Catholic catechist with a petition for canonization underway.

Mark Thiel, an archivist at Marquette University, told the Register that the process to open a cause for Black Elk began in 2012 at the canonization of St. Kateri Tekakwitha in Rome.

Thiel said his research showed Black Elk was a “lifelong seeker to know the Great Spirit better,” faithful to the Catholic and Lakota traditions, and actually signed the petition for St. Kateri Tekakwitha’s canonization in 1885, before he became Catholic.

Thiel had thought Black Elk might be a saint. But it was a chance encounter with George Looks Twice at St. Kateri’s canonization — neither man knew each other at the time — who told him he wished one day that the Church would recognize his grandfather as a saint.

“It was the first time that I had heard anyone else say Nicholas Black Elk should be canonized.” Thiel said.

At the request of Native American Catholics, Thiel organized a petition drive to obtain signatures asking for Nicholas Black Elk’s cause for canonization to be opened. Rather than use the internet, Thiel opted for the old-fashioned method of going face-to-face to ask people for their signatures and their support. The petition was finally presented and accepted in the Diocese of Rapid City in April 2016.

Thiel said Black Elk’s cause, along with other causes, such as the Martyrs of La Florida, is helping to make more Catholics in the United States discover a great legacy of faith from those who preceded them. The cause is helping Native American Catholics realize the great models of holiness they have contributed to the Church, and it could lead to other causes, such as that of Joseph Chiwatenhwa, who became the first lay administrator of a parish in North America, or Rose Prince of the Carrier nation, whose life in British Columbia mirrored St. Kateri’s in many ways. She was also discovered several years after her death to be incorrupt.

“As one person told me: We have to thank St. Kateri,” Thiel said. “She opened the door.”

‘There’s a Lot of Work to Be Done’: Pro-Life Leaders Preview Post-Roe Landscape

The fight over abortion will kick into high gear at the federal and state level if Roe v. Wade is overturned.

Thorn, who died suddenly Easter Wednesday, left an indelible mark on the Church and the pro-life movement with her tireless insistence on providing God’s compassion for post-abortive mothers and fathers.

Father Michael Gaitley explains how to manifest the heart of Divine Mercy in our lives.

Beyond the Easter Vigil: The Secret to Keeping New Catholics Catholic

Cultivating a real experience of discipleship, making a decision for Jesus Christ, and being integrated into parish life are seen as key elements for keeping Order of Christian Initiation of Adults converts engaged in the life of the Church.

His funeral will be held in St. Peter’s Basilica on May 31.

Summer Movies 2022: Coming to a Theater Near You