Winning the Culture War One Yawn at a Time

My two favorite quotes of the day. The first is from Vicki Saporta, head of the National Abortion Federation.

“The anti-choice folks have gotten smarter. They’re no longer talking about overturning Roe, because there would be a huge backlash, she reportedly said. "But if you make abortion inaccessible in state after state, they are in fact achieving their goal while seeming reasonable, when they’re anything but.”

The second is from Michelle Goldberg of The Daily Beast. "The anti-abortion movement has been making epochal advances using regulations that are as tedious to read about as they are to describe," she said. "In the abortion wars, boredom has become a powerful weapon."

You see, pro-aborts are very used to having the deck stacked against pro-lifers. Along with their friends in the media, they've (with little effort) attacked and demonized pro-life leaders as kooks for years. But now the pro-life cause is being pushed in so many places and from so many faces that the smear machine can't fix its slimy gaze. They don't know what to do. So they end up rallying around whatever they can find, whether it be the mythologizing of Wendy Davis' sneakers or the bullying of the HHS mandate.

Pro-aborts still have all the levers of government and the media on their side. But pro-lifers are winning over the country.

We have gotten smarter. We've also gotten younger. And pro-aborts have grown fatigued. Let's be fair to them, when you are forced to rally around the cause of dismembering babies it can get a little tiring after a while.

Most pro-lifers I know feel a momentum shift. And it's not coming from D.C. Pro-lifers have learned that all we can expect from D.C. is periodic press releases and show legislation that will never pass. So we're not waiting for a national party to lift and propel our banner forward. We're going around D.C. We're going around the media. We're standing in the halls of our state legislatures. We're calling on the people with referendums. We're pushing legislation to protect women and babies. We're praying in front of clinics. We're talking to women. We're writing about it on the internet. We're making videos.

In the words of Hillary Clinton, "I don't feel no ways tired."

Now. Are you ready for the scariest picture in the world to fatigued pro-aborts? 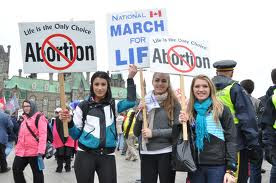 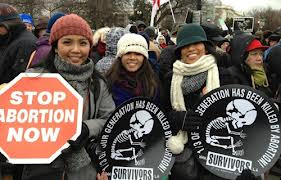 Three bombs exploded without warning on July 31, 1972 in the County Derry village of Claudy, killing nine people and injuring more than 30.

The Philippines on Friday reported 20,336 new COVID-19 cases, with more than 300 deaths, the highest in almost a month.

The newly instituted ministry of catechist is for lay people who have a particular call to serve the Catholic Church as a teacher of the faith.

Many dioceses have left the decision to be vaccinated to their employees, but Chicago, Lexington and El Paso have already moved to mandate COVID-19 vaccines.

“The cooking is spreading God’s word and love.”

Pope St. John Paul II Brought God Into My Suffering, Just When I Needed Him Most

The crosses I was bearing — depression and M.S. — were crushing me, but here was the Pope himself telling me to unite my suffering with Christ.

COMMENTARY: At a time in which Catholics are being summoned to live our faith with greater courage and charity, this spiritual son of the French saint provides a great example and, we pray, will become a much-sought intercessor.

DIFFICULT MORAL QUESTIONS: Our reticence to speak out is understandable. Our hearers will frequently take offense. But fear shouldn’t dictate what we do.

Biden Contradicts Faith, Reason — and Himself

Benedict XVI: Legalization of Same-Sex Marriage is ‘A Distortion of Conscience’

Paterson Bishop: Vaccination Exemption for Clergy ‘Will be Minimal’