I don't remember Muslims being called “Ramadan enthusiasts” after a mosque shooting.

The phrasing of statements from Barack Obama and Hillary Clinton has raised the interest and ire of many Christians. In response to the Sri Lanka massacre that targeted Churches and hotels on Easter morning, the two of them, instead of saying the word “Christian,” referred to the victims as “Easter worshippers.” 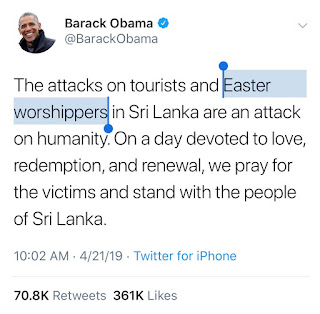 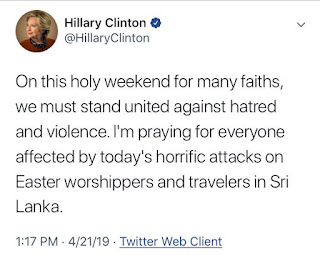 The phraseology is weird, isn't it? It’s like they're reading from the same hymnal.

Clinton wrote, “On this holy weekend for many faiths,” which is true — but she's specifically writing a tweet about an attack on Christians, so why obfuscate? And then we get the “I’m praying for everyone affected by today’s horrific attacks on Easter worshippers and travelers in Sri Lanka.”

Remember that 2016 nightclub shooting in Orlando, the setting was specifically called a “gay nightclub” mainly because it clarified the intent of the shooter.

Obama said at the time, “This is an especially heartbreaking day for all of our friends, our fellow Americans, who are lesbian, gay, bisexual, or transgender.” Specifics.

Here, the clear intent of the bombers was to kill Christians at Church on Easter. But the word Christian isn't used. It’s “Easter worshippers.”

This would not be a major issue at all, but there is history here. Obama has been no friend of Christians with his extremism on abortion and his blatant attacks on religious liberty. So these tweets don’t exist in a vacuum. This is the president whose White House intentionally kept switching the nomenclature of “freedom of religion” to “freedom of worship.” Context.

In 2016, Hillary released a very specific statement about the Orlando shooting: “This was also an act of hate. The gunman attacked an LGBT nightclub during Pride Month. To the LGBT community: please know that you have millions of allies across our country. I am one of them. We will keep fighting for your right to live freely, openly and without fear.” Specifics. LGBT nightclub during Pride month.

My heart breaks for New Zealand & the global Muslim community. We must continue to fight the perpetuation and normalization of Islamophobia and racism in all its forms.

White supremacist terrorists must be condemned by leaders everywhere. Their murderous hatred must be stopped.

The “global Muslim community.” And she calls out Islamophobia. But slaughtered Christians get “Easter worshippers.”

Hillary has had had major issues with Christians. In fact, speaking of laws against abortions, she said that “deep-seated cultural codes, religious beliefs and structural biases have to be changed.” And Christians understood her point well even as the media pretended not to.

On top of that we know that it's not just Obama and Hillary. The media plays often plays the same games.

Terry Mattingly of Get Religion pointed out that journalists at USA Today took 15 paragraphs before mentioning the word “Christian.”

In the end, however, this is not a surprise to us. In fact, the only surprising thing is that this terrible and tragic incident of anti-Christian violence received any coverage at all.

BOOK PICK: Fatima: 100 Questions and Answers on the Marian Apparitions

COMMENTARY: Blessed Pius IX inaugurated a new era for the Church by dissolving the Papal States.

COMMENTARY: The Netflix film supports the claim that the global ruling class approves of pedophilia.

Ginsburg’s death could tip the balance of the court to a 6-3 conservative majority, if President Donald Trump nominates a new justice to fill the vacancy left by Ginsburg before the November election.

Why Abortion Is Different From Other Issues

Archbishop Cordileone: Worshippers Should Be Treated Equally During the Pandemic