Remember a while back when some Florida pastor with a bad mustache and worse manners threatened and then ultimately burned a Koran? I am sure you do. It had plenty of two things, media coverage and body count.

There is another story that is likely to have neither of those things, mercifully. The Bible Society in Israel sent some copies of the New Testament to members of the Israeli Knesset with a note that said "We hope the book will help you and illuminate your way.” MK Michael Ben Ari, with better facial hair than the aforementioned Florida Pastor but equally poor manners, made a show of ripping it up in front of the press. 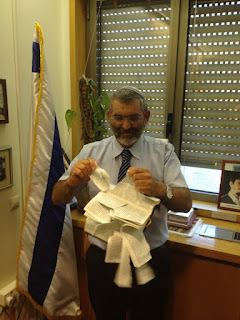 “This abominable book (the New Testament) galvanized the murder of millions of Jews during the Inquisition and during auto da fe instances,” Ben Ari said adding that “Sending the book to MK's is a provocation. There is no doubt that this book and all it represents belongs in the garbage can of history.”

Millions of Jews killed in the inquisition? No, not millions, not even close. Yet even one is too many. It seems that those who do not know their history are condemned to make it up.

But it seems odd that Mr. Ben Ari would loose his vitriol on Christians in such a rude way at this moment in history for the Jews, as the scary music is playing loudly but we Christians are not in the scene. People in that part of the world sometimes mail things much more offensive to Jews than New Testaments, things that go tick and all. And besides, persecuted Christians are doing most of the dying around the world these days.

To their credit, multiple other member of the Knesset condemned the offensive act.

Ripping up the Word of God is rude for sure, but if Jesus can take it, I suppose we can too.

Denton, a rising senior at the university, was removed from his position as head of the university’s student senate in early June over remarks he made in a chat forum of the school’s Catholic student union in late May.

The return of the Confraternity New Testament in new editions is welcome in the evolution of the Catholic English Bible and biblical scholarship.

Pompeo: Nowhere is Religious Freedom More Under Assault Than in China

The U.S. Secretary of State’s remarks at a religious freedom symposium came a day before he is expected to meet with Cardinal Pietro Parolin at the Vatican to discuss the renewal of the Holy See’s provisional accord with China.

Why Cardinal Pell Is Vindicated by Cardinal Becciu’s Firing

Preaching and the Election: How Not to Get in Trouble but Still Be Effective

Religious Freedom Is On Your Ballot

Cardinal Pell to Return to Rome This Week