8 Most Hilarious and Unsettling Obama-as-Deity Metaphors

Georgetown sociology professor Michael Eric Dyson said yesterday that Eric Holder was the Moses of this Administration. Hey, that's one of the most religious things to come out of a Georgetown professor's mouth in a long time so we should probably take what we can get.

But it did get me wondering, in that metaphor wouldn't Obama be God? Certainly by now, that shouldn't surprise anyone. The Obama-as-God metaphors have been rampant the past half decade. After all my years of religious study I'm sure of only two things. There is a God. And Obama ain't Him. But that doesn't stop me from enjoying some of the most egregious and just flat out hilarious attempted deifications of ts of  the president:

1) Of course you have the everyday deification from the media which constantly portrayed Obama with a halo. 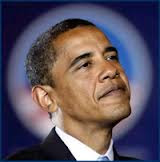 2) The Gospel of Barack.

We've all heard of Matthew, Mark, Luke and John but hey, they were written like totally a long time ago. They needed a little "evolving" on some issues, I guess. So author Barbara Thompson wrote a book called, "The Gospel According to Apostle Barack: In Search of a More Perfect Political Union as "Heaven Here on Earth." Here's an excerpt:

Apostle Barack, the next young leader with a new cause, had been taken to the mountaintop and allowed to see over the other side. He had the answers to unlock the kingdom of “heaven here on earth” for his followers. The answers were repeated – over and over – in speeches Barack had made from his presidential announcement to his inaugural address. Those speeches or his teachings contained the answers to the middle class and working poor people living in a “heaven here on earth.” For when the answers were unlocked and enacted, Apostle Barack’s vision of America would be realized.

3) Magazine covers: Years ago Time Magazine asked if God was dead. But Newsweek believes they found Him alive and well...and in the White House. 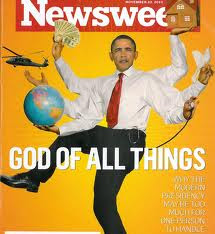 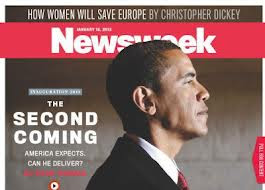 Hey, when you have a car full of clowns, one of them has to be brave or stupid enough to be the first to step out. Newsweek editor Evan Thomas on MSNBC was that guy. At least he was one of the first to really embrace the whole Obama=God buffoonery on a national stage. And yes, MSNBC is a national stage even if very few people are looking at said stage. Evan Thomas said it plainly:

"In a way Obama is standing above the country, above the world. He's sort of GOD. He's going to bring all different sides together."

The great thing about Evan Thomas is that he didn't even say Obama was like God, he said he sorta' was God. You've got to give Thomas credit for that creepy image.

5) Obama's election is kinda' like the birth of Christ. Or something.

Lawrence Carter, dean of the Martin Luther King Jr. International Chapel at Morehouse College in Atlanta, was quoted in the Chicago Tribune on November 29, 2008 saying: "It is powerful and significant on a spiritual level that there is the emergence of Barack Obama 40 years after the passing of Dr. King," said Carter. "No one saw him coming, and Christians believe God comes at us from strange angles and places we don't expect, like Jesus being born in a manger."

6) The Obama campaign itself. A campaign office had this sign in the window. 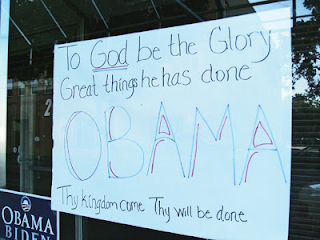 I'm just wondering. Whose will is being done is whose kingdom?

7) Spike Lee Director Spike Lee said of Obama's election that it would split the historical timeline kinda' like B.C. and A.D. That may or may not be true but perhaps not for the reasons he means.

"When that happens, it will change everything. ... You'll have to measure time by `Before Obama' and `After Obama,'" Lee said.

8) Obama as "Lightworker." This one still makes me laugh. Mark Morford, San Francisco Gate columnist, wrote one of the great deification pieces about Obama. Attempting to prepare you for it would be like explaining why William Shatner is awesome. You just can't explain it. You have to see it, hear it. Enjoy:

Barack Obama isn't really one of us. Not in the normal way, anyway. This is what I find myself offering up more and more in response to the whiners and the frowners and to those with broken or sadly dysfunctional karmic antennae - or no antennae at all - to all those who just don't understand and maybe even actively recoil against all this chatter about Obama's aura and feel and MLK/JFK-like vibe. To them I say, all right, you want to know what it is?

The appeal, the pull, the ethereal and magical thing that seems to enthrall millions of people from all over the world, that keeps opening up and firing into new channels of the culture normally completely unaffected by politics? No, it's not merely his youthful vigor, or handsomeness, or even inspiring rhetoric. It is not fresh ideas or cool charisma or the fact that a black president will be historic and revolutionary in about a thousand different ways.

It is something more. Even Bill Clinton, with all his effortless, winking charm, didn't have what Obama has, which is a sort of powerful luminosity, a unique high-vibration integrity.

Dismiss it all you like, but I've heard from far too many enormously smart, wise, spiritually attuned people who've been intuitively blown away by Obama's presence - not speeches, not policies, but sheer presence - to say it's just a clever marketing ploy, a slick gambit carefully orchestrated by hotshot campaign organizers who, once Obama gets into office, will suddenly turn from perky optimists to vile soul-sucking lobbyist whores, with Obama as their suddenly evil, cackling overlord.

Here's where it gets gooey. Many spiritually advanced people I know (not coweringly religious, mind you, but deeply spiritual) identify Obama as a Lightworker, that rare kind of attuned being who has the ability to lead us not merely to new foreign policies or health care plans or whatnot, but who can actually help usher in a new way of being on the planet, of relating and connecting and engaging with this bizarre earthly experiment.

So how's that "new way of being on the planet" working out for you?

The Sept. 19-23 trial will be conducted in Chinese, with the closing arguments in English.

The actress' devotion to the prayer came as she asked God to save her unborn child.

The lawsuit was filed in 2020, but argued only last month before U.S. District Judge Reed O’Connor.

Slovakian shepherd, who died at 98, lived his vocation in exile in the Eternal City.