“It is precisely in these two cities that the deep soul of the poet is contained. We can still breathe it in some alleys and places that have remained intact over the centuries.”

The poet Dante famously traveled through Hell, Purgatory, and Paradise in his masterpiece the “Divine Comedy.” Now, Catholics have a chance to follow in his footsteps — his earthly ones, that is.

Dante’s Walk is a 235-mile route that takes pilgrims from the Byzantine splendor of the city of Ravenna, northern Italy, to the Renaissance magnificence of Florence — and back again.

The pilgrim path’s 20 stages are set out in detail in a new Italian guidebook, written by Marcello Bezzi, Silvia Rossetti, and Massimiliano Venturelli, coinciding with the 700th anniversary of Dante’s death.

“Ravenna and Florence are, in fact, the two symbolic cities of Dante, of his youth, his formation, his political life, and his death,” Venturelli told ACI Stampa, CNA’s Italian-language news partner.

“It is precisely in these two cities that the deep soul of the poet is contained. We can still breathe it in some alleys and places that have remained intact over the centuries.”

“And it is in these two cities that we wanted to build two city itineraries, thanks to which it is possible to visit and admire the places that characterized the life and formation of Dante Alighieri.”

Pilgrims begin at Dante’s tomb in Ravenna, where the poet died in 1321. They then set out on foot, mountain bike, or even horseback for the next stop in Pontevico, a municipality in the province of Lombardy.

In the following days, they pass through countryside teeming with medieval villages and castles, before arriving at Dante’s House Museum in Florence, the city where the poet was born in around 1265.

The house is close to the church of Santa Margherita de’ Cerchi, where Dante first saw Beatrice Portinari, widely identified as the muse who inspired his 1294 work La Vita Nuova and guided the poet through Paradise in the third and final part of the Divine Comedy.

Pilgrims then turn back towards Ravenna, taking a different country route. 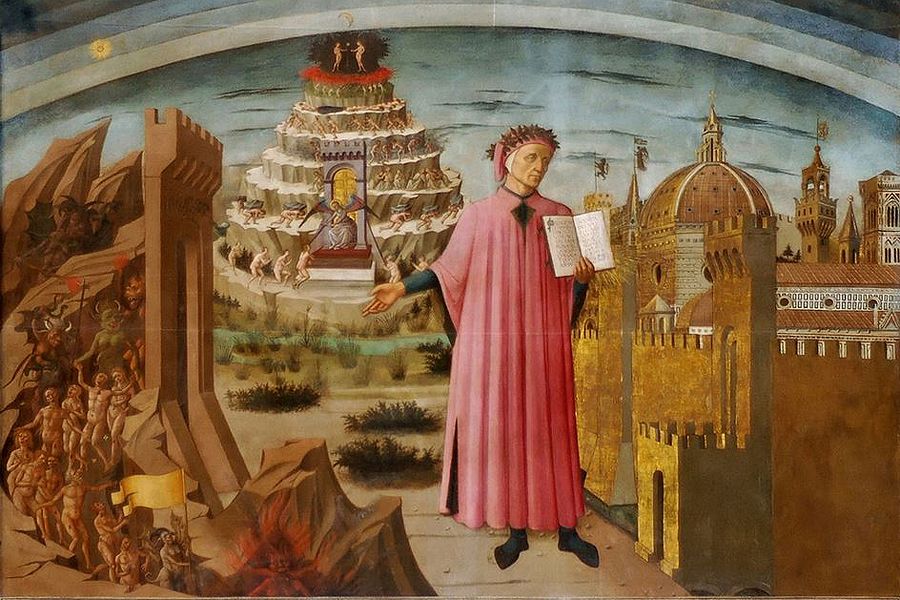 The association Il Cammino di Dante recommends that travelers prepare carefully for the journey. It encourages pilgrims to book accommodation three weeks before departure and two months ahead in the peak months of July and August.

It advises hikers to carry a backpack weighing no more than 10 kilograms (22 pounds), including a sleeping bag, camping mat, utility knife, sunscreen, water, and energy bars.

A “Year of Dante” was launched in Ravenna on Sept. 5, 2020, in the presence of Italian President Sergio Mattarella. The year being marked by events throughout Italy.

Pope Francis said on Oct. 10, 2020, that the 700th anniversary of Dante’s death should inspire people to rediscover the “Divine Comedy.”

Speaking to a delegation from the Archdiocese of Ravenna-Cervia, the Pope announced that he was preparing “a more extensive reflection” on the leading poet of the late Middle Ages to be released in 2021.

The Pope said he hoped that teenagers, in particular, would engage with the Divine Comedy, widely regarded as the greatest poem in the Italian language.

He said: “It may seem, at times, as if these seven centuries have opened up an unbridgeable distance between us, men and women of the postmodern and secularized age, and him, the extraordinary exponent of a golden age of European civilization. And yet something tells us that it is not the case.”

“Teenagers, for instance — even those of today — if they have the opportunity to encounter Dante’s poetry in a way that is accessible to them, find, on the one hand, inevitably, a great distance from the author and his world, and yet, not the other, they perceive a surprising resonance.”

Asked to name the highlights of Dante’s Walk, Venturelli said: “Certainly not to be missed are the stages passing through the Casentino [valley], and I refer to Campaldino, Poppi, Porciano, Romena and the Hermitage of Camaldoli, inextricably linked to Dante’s life from 1289 onwards.”

5 Great Poets Every Catholic Should Know

An appreciation of the creative genius of Dante, St. John of the Cross, Alexander Pope, St. Ephrem the Deacon and Gerard Manley Hopkins.

BOOK PICK: Oratorian Father PaulPearson tackles purgatory with and through ‘The Divine Comedy,’ offering a springboard for a prayerful reflection of our own lives.

Dante’s Message From the Underworld to Today’s World

COMMENTARY: The great medieval Catholic poet still has lessons to impart — 700 years after his death.

A gunman killed 14 students and a teacher at Robb Elementary School in Uvalde, Texas, about 90 miles west of San Antonio, on Tuesday.

Amid the shortage, Trudden recommended families turn to their local pregnancy help organizations for assistance and use OptionLine.org as a tool to find the center closest to them.

Pope Francis Prays for Victims of the Gaylord, Michigan, Tornado

The Holy Father expressed his closeness on Tuesday to the victims; two people died in the devastating storm last week.

During his homily at Drury’s May 21 funeral Mass at Assumption Catholic Church in Syracuse, New York, Father Nicholas Spano said Christ’s disciples have the mission of reflecting the light of God.

Why Are There Two Creation Stories in the Bible, Rood Screens, and More Great Links!

Don’t Wait to Cram for Your ‘Final Exam’

“Each man receives his eternal retribution in his immortal soul at the very moment of his death, in a particular judgment that refers his life to Christ: either entrance into the blessedness of heaven — through a purification or immediately — or immediate and everlasting damnation.” (CCC 1022)

Loreto and the Holy House of Mary

‘Loreto, after Nazareth, is the ideal place to pray while meditating on the mystery on the Incarnation of the Son of God.’ —Pope Benedict XVI

Why Do We Ask Mary to Pray for Us?

“After her Son’s Ascension, Mary ‘aided the beginnings of the Church by her prayers.’ In her association with the apostles and several women, ‘we also see Mary by her prayers imploring the gift of the Spirit, who had already overshadowed her in the Annunciation.’” (CCC 965)

An Exorcist Talks About Horror Movies and Board Games, Modern Forerunners of the Antichrist, and More Great Links!

Without Mentioning Cardinal Zen’s Arrest, Pope Francis Says He Is Praying for the Church in China

How Does One Converse With a Catholic Politician on Abortion?