Sanger: "We cannot go into China with our sympathies and our moral codes, saving her babies from infanticide, without increasing her problems

Holding letters of introduction from Chinese intellectuals in the U.S., Margaret Sanger, the infamous founder of Planned Parenthood, traveled to China in 1922 to enjoy the praise of journalists and intellectuals who gathered to hear her lectures about her favorite subjects: birth control, overpopulation, and eugenics.

At that time, Chinese intellectuals were just beginning to theorize about how the use of birth control could protect China from the problem of a growing population with limited natural resources. This would be a break from traditional Chinese thinking but some more eugenically minded intellectuals were willing to seek out ideas from the West. And nowhere in the West was the idea of eugenics gaining a stronger foothold at the time than in the United States of America. Even a young Adolf Hitler reportedly closely followed American eugenic legislation. "I have studied with interest the laws of several American states concerning prevention of reproduction by people whose progeny would, in all probability, be of no value or be injurious to the racial stock," reportedly said a young Hitler.

So it should be no surprise that Chinese intellectuals consumed by Malthusian fear, turned to a prominent American to hear more about eugenics. Enter Margaret Sanger. Interestingly, China had long stood against the Catholic Church and Christianity partly because they did not want to be contaminated by the West yet for some reason when it came to adopting the depravity of the Western culture, they seemed willing to jump enthusiastically on board. 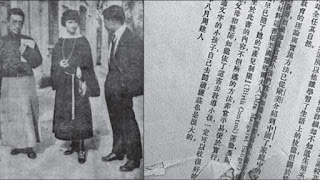 One Chinese writer acted as Sanger's translator while the chancellor of China's National University honored her with a dinner upon her arrival. It was estimated that almost 2000 people attended her lecture, which was advertised with a sign which read:

Unrestricted birth causes population increase to surpass the capacity of raising children. On a small scale it can cause every person and every family to fall into poverty, on a wider scale it is a crisis of world culture and world peace. In the West ever since Malthus many scholars have advocated birth control, but society has viewed this as immoral. In reality to give birth and not be able to raise a child, to give birth and kill because of disease, would it not be better if one limited this in advance, and only gave birth to excellent children?

In her speeches, which were later published in the U.S., Sanger reportedly said, "Now we need to advocate birth control to improve the race. I dare say mankind’s increase is sufficient."

In that same speech, Sanger, who had, in previous public statements, touted individual rights to contraception as the basis of her ideology, and said things such as "Only upon a free, self-determining motherhood can rest any unshakable structure of racial betterment," but this time she seemingly turned around and argued for restricting reproductive rights in light of overpopulation. According to Mirela David, Ph.D., University of Saskatchewan, who published a recent piece in a University of San Francisco Journal, "Sanger even promoted forced sterilization for both sexes enforced with the aid of military action to curb the reproduction of the mentally disabled."

“People afflicted with dementia, could not inhibit their desires," reportedly said Sanger, "and one has to use sterilization surgery to force them not to procreate.”

Mirela points out that, "For Sanger, eugenic concerns trumped women’s rights. Sanger’s position here was quite clear: reproduction was not necessarily a matter of individual choice."

Making her point even more starkly and less narrow, Sanger reportedly said, "the example of the inferior classes, the fertility of the feeble-minded and the mentally defective, the poverty-stricken classes, should not be held up for emulation to the mentally and physically fit yet less fertile parents of the educated and well-to-do classes.” Here, Sanger seemingly expanded the focus of her eugenics philosophy past the so called "mentally defective" by explicitly classifying it as a class issue, meaning that the educated and well-to-do were prima facie more fit. Interestingly, this idea found a foothold in China's whose communist revolution was supposed to be about eradicating different social classes.

But it gets worse. After touring factories in which children were forced to work and seeing firsthand the crippling poverty that existed in China, Sanger concluded that she was witnessing the "last act in the national tragedy of overpopulation." And she even seemed to defend infanticide in China in one column. Speaking of China and its "overpopulation," In fact, Sanger made it plain in her column that saving children from infanticide would only make things worse for China. I offer the text below so as not to be accused of taking this out of context.

We cannot go into China with our sympathies and our moral codes, saving her babies from infanticide, without increasing her problems. We find that after we have rescued 200 infants from the river one year, 2000 additional “sing-song” girls are in the ranks of the prostitutes the next year. In China, we witness the last act in the national tragedy of over-population. China, the mysterious fountainhead of art, philosophy, and the deepest wisdom of the world, is brought down by the super-abundant breeding of its worst elements. Here there are masses of human beings who live below the level of animals. They eat, sleep and breed in the crowded streets and sunless alleys. Thousands have not even a foothold on the land. They are compelled to live in makeshift boats on the crowded banks of the rivers.

The flame of Chinese civilization is flickering. It is threatened with extinction. There is a rising tide of famine, of wretchedness, of disease--a flood which, because of the incessant fertility of those millions, spreads like a plague. To contribute to famine funds and to the support of missions in China is like trying to sweep back the sea with a broom. But as long as the American public prefers sentimentality to science this waste of money, thrown into the bottomless pit of charities, will continue. China does not need our missions. The Chinese need our sanitation, our hygiene, our Birth Control.

Where does one even start to calculate the horror of words like that? Sanger warns against judging with our moral codes (i.e. Christianity) against whatever China must do to prevent overpopulation. She expressly said that China does not need our religious missionaries but birth control. Ironically, here, she essentially admits that it is Christianity that stands in the way of the horrors of eugenics. On that, we can agree.

In the end, it's difficult to calculate the impact Sanger had on the ensuing horrific record of eugenics employed by the Chinese government but at least one birth control advocate in China, Zhang Jingsheng, jealously wrote at the time that her impact was highly significant.

Back then I attempted to promote methods of population control widely, but received nothing but curses and abuses from society. Within less than a year [in 1922] Mrs. Sanger from the United States came to China and promoted exactly the same ideas, and the newspapers, which lambasted me, suddenly welcomed Mrs. Sanger’s views. In fact, my theories were more profound than Mrs. Sanger’s. But I was insulted, and she was praised and enjoyed a great reputation. The reason for this difference was because Sanger was an American woman, and I was just a Chinaman!

The ensuing years of forced sterilizations, abortions, and infanticide have been a moral, economic, and demographic calamity in China. I can't help but wonder if Margaret Sanger would be proud.

From prayer to ‘The Chosen,’ best wishes for a blessed season.

‘Dobbs v. Jackson’: What did Roberts, Kavanaugh, and Barrett Say?