On that bright September 11th morning almost 10 years ago, Muslim terrorists took down the World Trade Center, and amid all the heartbreak, dust, and rubble two intersecting steel beams stood impossibly in the shape of a cross giving comfort to a confused and bewildered country.

Now, a group of atheists is suing to take down the cross.

On Saturday Father Brian Jordan, a Franciscan Monk who blessed human remains and ministered to Ground Zero workers after 9-11, blessed the cross at the 9/11 Memorial and Museum at the WTC site. 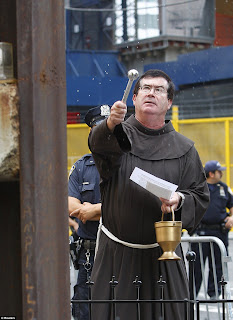 The lawsuit which aims to have the cross removed from the memorial, names pretty much anyone it can name including the state of New Jersey, the city of New York, New York Mayor Michael Bloomberg and New Jersey Governor Chris Christie.

American Atheists, which filed the lawsuit in state court, argues that keeping the cross at the memorial is “government enshrinement of the cross” and “an impermissible mingling of church and state.”

You see, for wacko atheists, simply chronicling the cross as part of the story, which it clearly was, is too much. They literally want history whitewashed of any Christianity (never mind the present and future.)

Dave Silverman, president of the atheist group, says the cross must come down because it’s “become a Christian icon.”

Establishing his mental midgetry for posterity, Silverman argued that it’s “ridiculous” to think that God can exist because people were killed on 9/11. Ah, what scathing logic.

“It has been blessed by so-called holy men and presented as a reminder that their god, who couldn’t be bothered to stop the Muslim terrorists or prevent 3,000 people from being killed in his name, cared only enough to bestow upon us some rubble that resembles a cross. It’s a truly ridiculous assertion.

Here’s the thing -millions of men and women took solace from that cross and if you’re going to memorialize that day in reality, you have to take into account and remember that cross as part of the story. It was a real part of that day that shouldn’t be whitewashed because some happen to not believe in God. 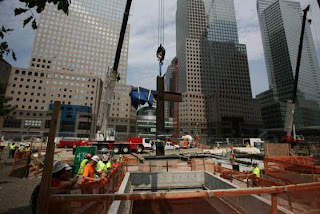 Silverman himself admits that the cross played such an important role in the aftermath that it became a “Christian icon.” For him, that means it must be hidden away even by those who simply seek to remember all the events surrounding 9/11.

Would Silverman have the memorial whitewash the reality that many Christians took comfort in that cross?

Would Silverman also have us ignore the radical Islamic madness that prompted the attacks because it too touches on religion?

Think about this. If Silverman’s logic is followed we should also make sure that any Star of David or any Jewish symbols are removed from the Holocaust Museum, which receives millions in federal funding.

That, of course, would be ludicrous just as this lawsuit is ludicrous.

Note: I originally mistakenly wrote 11 years ago. I fixed it.

COMMENTARY: It may come to us through pain, joy and longing. All three give us reason to say, ‘Come, Lord Jesus.’