The Most Anti-Catholic Political Ad You'll Ever See

As you can see the pic takes up nearly the entire length of the postcard. It’s anti-Catholicism is not one point of many. It’s the point. 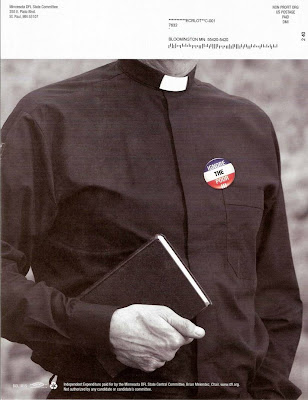 According to its website “The Minnesota DFL supports and works to enact the ideals and principles of the Democratic Party and strives to sustain the foundations in our Party’s grassroots history.”

One of the more worrisome things about this is that this group must believe that there’s enough of an anti-Catholic vote that this would pay dividends. Could that be true?

Never mind the factual basis the charge that the Church ignores the poor is absolutely ridiculous because the Church is THE most charitable organization on the planet. But this postcard has nothing to do with the poor. What this is about is the fact that the Church stands strong against abortion and gay marriage. And that makes some very angry.

This election season has been a nasty one. And this may be its low point.

Update: I’ve received a number of notes saying the DFL is actually Minnesota’s state Democratic Party which merged with the Farmers and Labor Party in the 1940’s, making this postcard even more egregious.

Meloni has described herself in speeches as a Christian and has publicly expressed her admiration for Pope St. John Paul II.

The cardinal said their approach is not pastoral and ignores Catholic teaching.