How Old Will the Next Pope Be?

Pope Benedict's resignation because of age-related health issues has implications for how old the next pope will be.

It gives the cardinals a push to elect a younger man who will have more energy to bring to the office of pope.

But how young are they likely to go?

And that tells us something about who is likely to be elected.

My initial impression was that the cardinals will likely want to elect someone who was older than John Paul II but younger than Benedict XVI.

John Paul II was made pope at age 58, which led to he unusually long papacy, which lasted 26 years.

Benedict XVI was made pope at age 78, which led to his relatively brief papacy (by modern standards). It will have lasted just under 8 years.

The cardinals are likely to want a papacy that won't last as long as John Paul II's (it was one of the longest in history) but that will be longer than Benedict XVI's.

My initial impression was that the cardinals will choose a man between 60 and 70 years old.

I found some confirmation for this sense in an interview with Cardinal Joachim Meisner of Cologne, who suggested that the next pope will be "No more than 70."

By "vacancy," I mean the point that a pope dies or resigns from office.

It's easy for us to wonder about the extent that medical technology is extending the human lifespan and how much this may impact the length of papal reigns.

While this may play a very notable role in the future, so far it hasn't had a huge impact.

There has, though, been a trend over the last few centuries toward popes living to higher ages.

Here is a chart of the ages at which the papal office became vacant for all the popes since the Protestant Reformation (the last 500 years). All but Benedict XVI died in office. 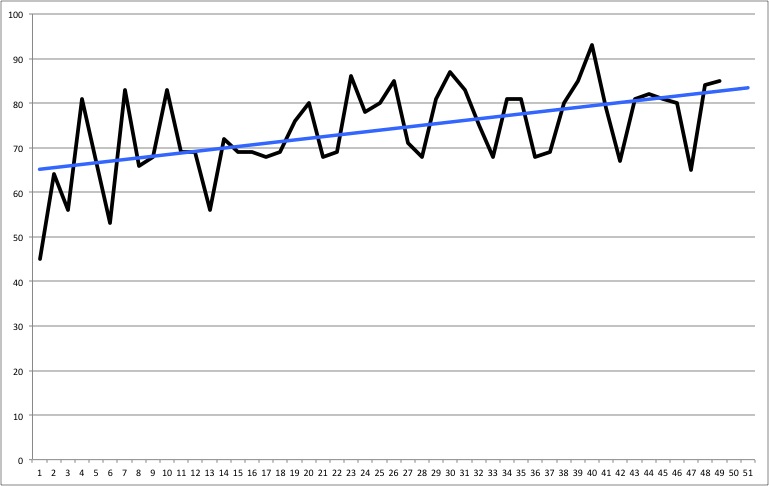 As you can see, the last several popes (except for John Paul I) all have left office after turning 80.

The cardinals thus should expect the next pope will leave office in his early 80s (or possibly later if Aubrey de Gray and Ray Kurzweil have anything to do with it).

The cardinals might then backtrack from this expectation, deducting the length of reign they find desirable, to establish a pool of candidates to consider.

There has been a similar increase in length of reign in recent times.

Here is a chart of how long the reigns of all the popes have been since the Reformation. 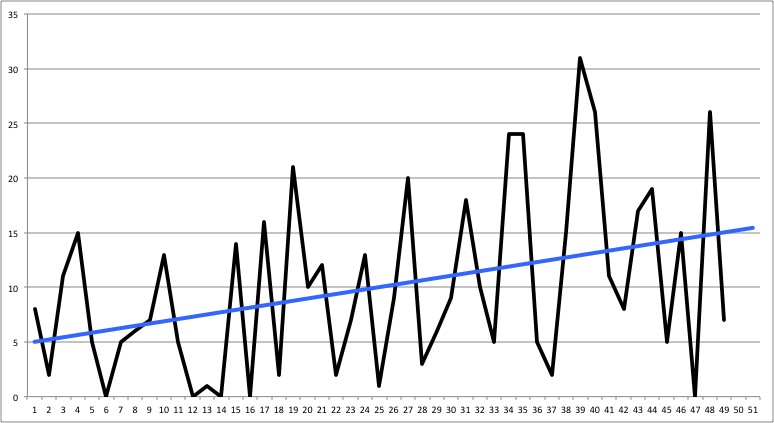 This fits with my initial impression that the cardinals would likely desire a papal reign longer than Benedict XVI's but shorter than John Paul II's.

It appears that, these days and on average, they tend to pick men who will reign for an average of 15 years, which suggests that this is the length of reign they find desirable, though any given reign will almost necessarily be longer or shorter.

We can also look at the age a which popes have been elected. Here is a chart of that . . . 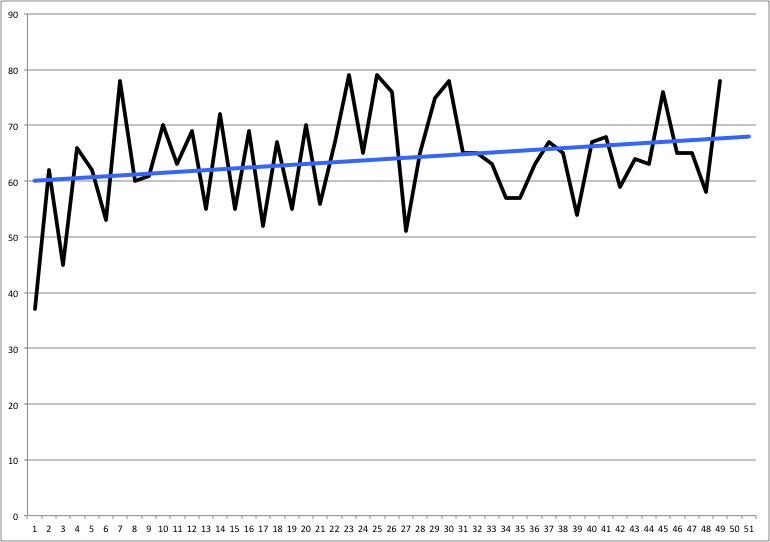 The current trend line would point to a man in his late 60s, perhaps around 68.

Putting the Pieces Together

Unless the cardinals are expecting dramatic medical advances in the next papacy, then they should expect the next pope to leave office in his early 80s, perhaps around age 83.

If they find a 15 pontificate desirable, that would lead them to look for a man in his late 60s, perhaps around age 68.

I think, though, that there are two things that may push them to go a little younger:

Given these events, and the challenges facing the Church, they may well go younger than what the historical trend would suggest.

I therefore stand by my initial impression that the next pope is likely to be between 60 and 70.

Who Is in That Age Range?

If the foregoing considerations are correct, that would allow us to come up with a list of likely candidates based on age.

It turns out that 47 of the 115 cardinal electors are in the right age range.

Here is a shorter list of those who are in this age range that are being cited as being particularly notable cardinals--or even as papabile (men who could be elected pope)--by competent Vatican observers:

Would the cardinals be willing to elect someone outside this age range?

I think they would be, if they thought they had the right man.

It is unlikely that they would elect anyone under 60, because this would be asking for another John Paul II-length reign.

However, one candidate that is being discussed as papabile who falls under 60 is Philippine Cardinal Luis Tagle, who is 55.

I think it is more likely, if they cardinals did vary from this age range, that they would do so on the other end of the spectrum.

A promising candidate in that case would be Italian Cardinal Angelo Scola, who is very highly thought of--and discussed as papabile--though he is 71 years old.

I'll have more thoughts on who is likely to be elected pope in the future.