This morning when I got to Mass, I saw that they were having one of those craft fairs that they occasionally have at the parish.

People set up booths and put out their wares—homemade potholders and jewelery and quilts and things like that.

I’ve strolled through these a couple of time and never found anything that interested me, which made the experience a little frustrating—taking the time to look but not finding anything for one’s efforts.

This morning, I quickly walked past the exhibits and went into the church.

Mass was good, and—it being All Souls Day—I made sure to say extra prayers for my lost loved ones.

Afterward, I exited the church through a different door and realized I would be walking through the craft fair.

I started looking around to see if there might be anything interesting this time, but what struck me was not a sight but a smell.

Like cinnamon and apples and I don’t know what.

Was the parish ladies’ guild having another cooking event? What was the delicious smell?

They say that memory and the sense of smell are closely linked, and this smell was brining back memories. I knew I’d smelled things like it before, but the memories of when and where were struggling to break through into consciousness.

What was it I was smelling?

I turned a corner and found my answer.

The aroma was coming from a potpourri stand.

I hadn’t seen anyone selling potpourri in ages, and I stopped to take a look.

The booth was run by a man and a woman of about my age, and as I looked around at their products, the man explained some of the benefits of it.

He said that, unlike some potpourri, theirs would not lose its smell quickly but should last for months.

He named several other benefits.

Suspecting that I might not be in the prime potpourri demographic, he added: “It would make a good gift for a wife.”

“More in memory of my wife,” I said, wistfully. “She really liked this stuff.”

It was true. Back in the late 1980s, when we were first married, there was a potpourri craze, and Renee really liked it. 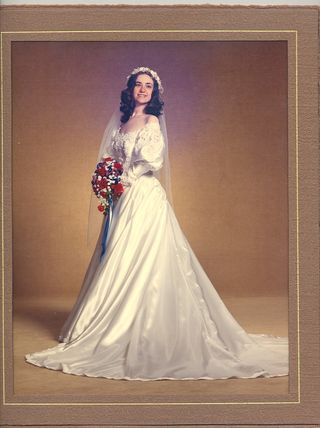 I remember us buying it in Eureka Springs, Arkansas—I think on our honeymoon, or maybe our first anniversary. We spent both there.

Eureka Springs is a tiny, touristy town up in the Ozarks, near where Renee and I grew up.

Actually, Eureka Springs is a lot like a giant version of the very craft fair I was at—lots of shops selling quilts and potholders and jewelry.

Lots of brightly colored crafts—with bold blues, brilliant yellows, and vibrant reds. Colors that have not yet faded and that form an ironic contrast to the rustic, old-timey themes that many of them embodied.

And there were the smells—the aromas of the Ozark forest that surrounds the town, of the foods being prepared in all the little restaurants, of sweetly scented pipe tobacco from the tobacconist (this was the 1980s).

And the smell of potpourri.

“When did your wife pass?” the man asked compassionately.

“Twenty-two years ago,” I said.

I knew he and the lady who ran the stand were thinking that I must have been very young when she passed, so I added: “It was very unexpected.” Realizing that this would only create more mystery, I said, “She had very aggressive cancer.”

They noted that they were hearing a lot of reports of cancer these days, and they commented on how horrible it is.

“Fortunately, in my wife’s case, it only lasted two months,” I said.

There was a pause in the conversation.

“We’d like to give you a box of potpourri,” the woman said.

I thanked them and agreed on the condition that they’d let me buy one of their other products. I ended up getting a couple of different scents of their potpourri-like room sprays.

They told me that they knew a little boy—just five months old—who had been diagnosed with cancer in his spine and brain and who had just lost he use of his legs.

I said I would pray for him.

We wished God’s blessings on each other, and I turned to walk through the rest of the craft fair.

I saw it with new eyes.

The colors. The textures. The smells.

And then I realized.

It was All Souls Day.

It was beautiful and painful.

In case you’re wondering, yeah, I misted up. And more. And said another prayer.

After all, it’s All Souls Day.