3 Unwise Men and a Baby

Talk about the worst birthday gift ever. Cute baby! Here’s some myrhh for His funeral to hide the stench of the corpse!

Dude. Killjoy much? I mean, who does that?

And it’s not like this was some last minute shopping these guys did and they were up against the clock running around the Bethlehem Wal-Mart minutes before closing. They traveled thousands of miles to give this. It’s tacky. I don’t care who you are. (I’m betting they didn’t even wrap the gifts. They were guys. Guys never wrap anything.)

The wise men, I’m thinking, don’t seem so wise if you ask me. But hey, they weren’t exactly rocket scientists. I mean, these are guys that got on their camels and traveled for thousands of miles because they saw something shiny. Their names, according to tradition, are Melchior, Caspar, and Balthazar. I half think we would have been better off with Moe, Larry and Curly. 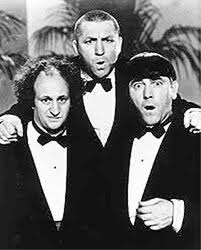 Look at their track record. They showed up at King Herod’s palace to cheer for the new king who was just born. Uhm. Seriously? Some surprise party. What did they think was going to happen?” Think about it. They just bust into the palace of the king of Judea and ask, “Where is the child who has been born king of the Jews?”

And then Herod has his men run around killing everyone under two years old. Why? Because the three so called “wise men” told him the new king was born. Oops. That’s not just a blunder. That’s a blunder with a body count.

And Herod told them to come back to tell him where the child was. The Bible says they were later warned in a dream not to go back to see Herod. You know what that means? THEY WERE GOING TO!!! Heaven was so confirmed that those three were going to bumble back to Herod and essentially hand Herod a map to the baby Jesus that Heaven had to explicitly tell them “Do not go back to Herod. Haven’t you already done enough? Sheesh.” (The sheesh, I believe, was implied as the Bible fails to mention it.)

But that’s why they may just be my favorite folks in the Bible. Because even them, stooges as they were, “came to the house where the child was and saw him with his mother, Mary, and they bowed down and worshiped him.”

If there’s hope for them and God can use even them for good, there’s got to be hope for even a stooge like me.