The Same Stones as Dachau

Sister Rosalia Bauer, a Franciscan Sister of Perpetual Adoration, prayed in front of what she called “the abortion mill” every Friday for 13 years. She said that as a nurse she could never call that building a clinic. She called it a mill. A mill that manufactured and profited from death.

She remembers being joined to pray at the clinic by a woman from Poland. The woman took one look at Northern Illinois Women’s Center and told Sister Rosalia that “the stone on the outside of the building are the same kind of stone used in Dachau.”

The building at 1400 Broadway in Rockford Illinois had ironically been built as a schoolhouse over a century ago but for the past few decades it’s been home to the region’s only abortion clinic. At its height, the NIWC destroyed 75 human beings a week. It may also have been one of the most infamous in the country.

Pro-life school teacher Kevin Rilott remembers the first time he came to pray at NIWC many years ago. A man came out and yelled at him “Why do you come here. Only n%&&ers and prostitutes get abortions. Why are you here?”

“He thought that would drive me away,” said Rilott. “But I thought if that’s the attitude, we’re definitely needed here.”

And things got worse from there.

Vicki Johnson, a pro-life Christian who’s prayed outside of the NIWC for over two decades, said she remembers someone affiliated with the NIWC dressed up as Cookie Monster handing children balloons made out of condoms at a youth picnic.

They all remember the landlord dressed as a priest ushering women into the driveway and yelling obscenities at the pro-lifers praying there. Another time a man dressed in a devil costume.

And then there were the windows. In the windows of the NIWC hung awful pornographic pictures, pictures of Jesus giving the middle finger to the pro-lifers, devil masks in the windows, a rubber chicken hung on a crucifix, and a sign saying of the NIWC “No job too big or too small.” They even hung a scoreboard of babies killed vs. babies saved at NIWC 50,000 vs. Jesus Christ 50.

Yeah, it was that bad.

But the pro-lifers never relented. Every Wednesday and Friday they were out there praying and pleading with the women who walked into the clinic. For years a group of pro-lifers came to pray outside an abortion mill in Rockford Illinois.

At its height the NIWC took the life of 75 children and it was open three days a week. But recently, that number had dwindled down to 20 per week and it was only open two days a week - a testimony of the power of pro-life sidewalk counselors and prayers.

The pro-lifers had become so effective that the NIWC erected sheet metal on the inside of the fence so the pro-lifers couldn’t make eye contact with the women entering the back of the clinic. So Bill Landerholm, the father of six, got on stilts so he could look over the fence and speak with the women. He remembers at least one child who was saved by this.

To counter Bill, the NIWC set up a radio boom box blaring a local radio station so that the pro-lifers offers of help could not be heard.

So the pro-lifers turned the tables on the abortion clinic. With the radio blaring, the station took a call from one of the pro-lifers and allowed for the activist to explain what was happening.

Needless to say, when the workers at the abortion clinic heard the pro-life message blaring over their own radio, they were more than a little perturbed. And this is where the story gets even weirder. Not content to stop blaring the radio, the landlord of the abortion clinic stood by the radio boom box with a chainsaw. A chainsaw! Any time he feared that the radio station might say something pro-life, he would rev up the chainsaw to drown out the radio.

Recently, the pro-lifers arranged for an ultrasound truck to be parked outside the clinic. But this opened up one of the most bizarre chapters in the NIWC’s history.

For the past few months, every time the ultrasound truck attempted to park outside the clinic, the NIWC’s landlord ran his old used cars out into the street to fill the spot. Think about how committed he was to preventing women from seeing the baby in their womb. As Sister Rosalia said, 85-90% of women who see an ultrasound don’t go through with the abortion. And he knew it because any time a spot opened up he raced out.

One day last August a number of priests arrived at the clinic to pray. The landlord was so disturbed by the presence of the priests that he spent his time creating and hanging anti-Catholic signs from the window. So consumed he was with hatred for the priests that he missed that a spot had opened up directly across the street from the clinic.

And because of that, a life was saved. A woman who was entering the clinic chose to go into the ultrasound truck instead of the NIWC. And the pro-lifers in Rockford held baby showers for mothers who chose life. “Formula, diapers, clothes, whatever they need,” said Kevin Rilott. “And we don’t leave it there. We’ve had women come to us five to ten years after they chose life. We’ve always met their needs.”

In contrast last May, pro-choicers stood in the driveway and cheered as women chose death.

Recently, there was a YouTube video showing someone affiliated with the clinic threatening to run over a pro-lifer who suffered a convenient leg cramp standing in the way of a car from blocking the ultrasound truck from pulling into a spot.

It was in September when a group of pro-lifers prayed around an image of Our Lady of Guadalupe outside the clinic. A woman walked towards the clinic but chose life using the pro-life mobile ultrasound clinic.

The clinic’s landlord saw this and came running outside and began what pro-lifer Kevin Rilott called “a verbal tirade of pornographic bile directed at the Virgin Mary.”

One pro-lifer, who is a navy veteran, said he had never heard such hideous and grotesque language.

But that day was the last day one of the most infamous abortion clinics in the United States would kill a child. After hundreds (if not thousands) of calls from the pro-lifers over the years to the Department of Health, there was an investigation.

“I think that the squeaky wheel gets the grease, said Landerholm. “They have inertia unless something moves them. If you give them a right push, it may just move them in the right direction.”

According to the suspension notice released by the Illinois Department of Public Health on September 30, 2011, “the department had found conditions at the facility that are a direct threat to the public interest, health, safety and welfare requiring immediate, emergency action.” It was closed down and never reopened.

It’s fitting that today, Dr. Alveda King will be at the NIWC to pray and celebrate the closing of the clinic with pro-lifers. She told me on Sunday, “The message I’ll be bringing is one of love, mercy, and grace.”

She said, “This is good news, not only for Rockford” but she said she’ll remind them that the fight is not over. “We must all keep fighting for the civil right of babies in the womb. If a person is not allowed to live, no other civil right can be realized.”

Vicki Johnson, a mother of three and grandmother of eight said, “After 29 years, it’s been a long time coming but abortion didn’t end in America Friday. We’re definitely going to continue our pro-life message.”

Landerholm said he’s already looking at abortion clinics an hour away from his home. “We have to go toe to toe with the workers of evil with our signs and prayers,” he said.

Now, the only sign they have in front of the NIWC is this one: 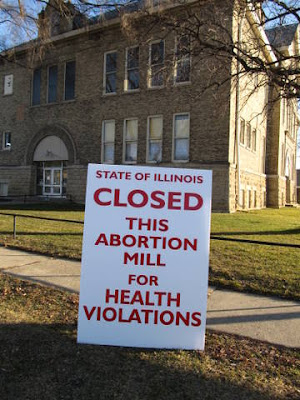 Pope Francis to Teens: Use the Summer Break Well

The video was sent to 130 youth, ages 12-18, taking part in a week-long Global Youth Tourism Summit in Sorrento, Italy.

The migrants were found dead in an abandoned tractor-trailer in San Antonio, Texas on the evening of June 27.