The Martyrdom of ‘the Most Beautiful Woman in Europe’

“The Lord found that it was time for us to carry his cross. Let us strive to be worthy of that joy.”

Described as “the most beautiful woman in Europe,” she was to marry a prince. And yet that same woman was to end her last days in the service of the sick and the poor, wearing only the plain garb of a nun, eventually, to die in an industrial wasteland as a martyr for her Christian faith.

A journey that started for her on the Mount of Olives, and continued with the Cross being laid on her shoulders on a February day in 1905, was ended as she began an ascent of Calvary to make her final oblation in July 1918.

Her Grand Ducal Highness Princess Elisabeth was born in Grand Duchy of Hesse on Nov. 1, 1864. She had been named after her distant ancestor, St. Elizabeth of Hungary. Ella, as she was to be known, was the second child of the Royal House of Hesse, a minor Germanic principality. Her upbringing was conventional; charming and bright, she was also beautiful. Many suitors were proposed or came hoping for her hand in marriage. One of these was a Russian noble, Sergei.

Thereafter, Ella left home and family, headed for a distant land to become a member of a formidable dynasty: Imperial Russia’s Romanovs. Ella and Sergei were married on June 15, 1884 at the Winter Palace in St. Petersburg. Initially, Sergei and his new bride were enveloped by life at court, with all its petty rivalries and dubious charms, but theirs was a love set apart, one based primarily on a shared Christian faith.

In 1888, the young couple represented the Russian Royal House at the dedication of the Russian Orthodox Church of St. Mary Magdalen on the Mount of Olives. There, whilst priests intoned prayers and incensed icons, Ella felt the first stirrings of her heart away from the Lutheranism of her birth. As it turned out, this visit to Jerusalem and the Holy Places impressed Ella greatly. Although always a devout Christian, her faith began to deepen from this time as she entered into an intense period of prayer and study, which eventually lead her to the Orthodox faith of her husband.

In the spring of 1891, Sergei was asked by his brother, Tsar Alexander III, to assume the position of Governor of Moscow. It was a significant post that was growing in importance on account of unrest from workers, intellectuals and anarchists. This city, that was to become Ella’s home, was then the seedbed of the revolutions that followed. And, as state repression followed unrest, soon that cycle became a deadly one for all concerned, not least its governor. Eventually, Sergei was to step down, but there were those who still sought revenge upon him.

On February 17, 1905, a grenade was tossed into the former Governor of Moscow’s carriage. It detonated immediately. As it did so, the windows of the nearby Kremlin rattled. Ella knew instantly that it was the sound of her husband’s assassination, and ran from the palace out onto the snow-covered streets.

Stunned but still calm, she knelt in the blackened snow beside the mangled wreckage, as an equally stunned crowd gathered around her. As help came to collect the mortal remains of her husband onto a stretcher, in the snow Ella noticed the religious medals he was wearing. Bending down, she gathered these into her palm, before rising to pass silently through the crowds back into the Kremlin’s dark emptiness.

Sergei’s assassin was easily apprehended at the scene, having also been wounded. Later, as he lay recuperating in his heavily guarded cell, the door opened to reveal, in the faint light, a strikingly beautiful woman dressed in mourning. As she drew near, she said: “I’m his wife”.

Soon the prisoner’s astonishment grew, realizing she had come out of concern for his soul. That night, Ella sat beside her husband’s killer and asked him to turn away from evil and seek repentance. And, whilst proffering an icon, with a face drained of all color and desperately trying to control her emotions, she told him she would continue to pray for him. Quietly, she left the cell. A few months later, after the assassin had been tried and hanged, the widow who had visited him was told by warders that they had found, at the end, placed next to his bed, the icon she had given him.

That winter afternoon, Ella lost her husband, but, curiously, was to gain something in return. Shortly afterwards, she removed from her royal chambers all items that she deemed unnecessary, leaving a sparsely furnished room. At its center stood a bare wooden cross and upon it hung the items of clothing taken from her husband on the day of his slaying. That death had brought her to the foot of a cross, the Holy Cross. Mysteriously, it showed her the way to an even greater Love than that which she had known with her husband.

In the years that followed, Ella’s jewels and finery were exchanged for a white woolen habit, a palace for a monastery, glittering ballrooms for a sickroom. Others were to join Ella in her mission, especially in the establishment of the Martha and Mary Convent of Mercy, dedicated to serving Moscow’s poor. At that time, however, another very different “gospel” was being preached upon Moscow’s streets.

Soon after Sergei’s death, Ella had a large cross erected at the site of his assassination—a symbol of her love for her husband, but, also, a memorial of this tragedy that was to shape her life. It was reported, during the first years of later revolutionary agitation, a man named Lenin helped tear down that cross with his bare hands. But it was much more than just monuments that that leader of Bolshevism now wished to obliterate.

The Great War increasingly became ruinous for the Tsar and Holy Russia. Governments rose and fell and then revolution came. With it, the Tsar was banished, with his family, to internal exile as a new regime was installed in St Petersburg with Lenin at its head.

The peace Ella had found serving the poor at the Martha and Mary Convent was not to last. By 1918, as Moscow fell into anarchy and then Red Terror, one night a knock came at the door of the convent. Soon after Ella was bundled into the back of a truck by the secret police, acting under Lenin’s express orders, and driven off into the night.

Like the Royal Family before her, she was eventually taken to Alapayevsk in the Ural Mountains where the Red Army held her under armed guard. Deep down, Ella knew her fate had been sealed and, she wrote the following:

The Lord found that it was time for us to carry his cross. Let us strive to be worthy of that joy.

In the early hours of July 18, Ella and a number of others were taken to a nearby disused mine, one that had recently flooded. Ella was ushered forwards first by the now increasingly agitated Red Guards. Calmly she approached them. Knowing the hour had finally come, she knelt before her executioners and prayed: “Father, forgive them, for they know not….” She was unable to finish her prayer, however, for rifle butts bludgeoned her face. Dazed she was picked up and, to the horror of those watching, thrown head first into the gaping blackness. One by one the other captives were also thrown down into the darkness below. Their task completed, the Red Guards left, leaving all to die.

An advancing White Army recovered her body months later. Eventually it was taken to the church on the Mount of Olives where she had come as a pilgrim some 30 years previously. It is there, facing the Holy City, with her earthly journey now over, that she awaits the advance of another, heavenly, army, who shall come to claim her.

Just over 70 years after Ella’s death across the now defunct Soviet Union, jubilant crowds watched as statues of Lenin were pulled down. And as a new dawn broke for Russia, it revealed, standing once more in the heart of Moscow, the memorial of Ella to her husband, Sergei, latterly re-erected: that Cross no longer now just a symbol to human love, but one of fidelity to Divine Love. 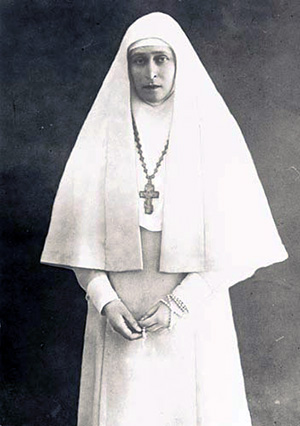 K.V. Turley K.V. Turley is the Register’s U.K. correspondent. He writes from London.

All the candidates died after the Russian Revolution and the Bolshevik establishment of the Soviet Union.

Leading Catholics in praying a “Hail Mary” for the country and its people, Pope Francis appealed for a decrease in tensions, and for an increase in mutual trust, reconciliation, and peace.

Today’s 55-minute private discussion was the Russian leader’s third meeting with Pope Francis, and fifth visit to the Vatican.

Biden Contradicts Faith, Reason — and Himself

Will the Blood of St. Januarius Turn to Liquid This Sunday?