Print
Blogs |  May. 30, 2019
If Roe v. Wade Goes Away…
The real fight begins when Roe is overturned.
Matthew Archbold

If I’m being honest, I don’t trust Justice Roberts or Kavanaugh yet to stand up to the immense pressure that will be brought to bear on them for even considering overturning Roe v. Wade. The media would be apoplectic and apocalyptic. The judges would instantly become the most ostracized figures in D.C. I hope they have the courage but I just don’t believe it. Yet.

But the fear from pro-aborts that Roe could be overturned is real. And in response, numerous Democrat presidential candidates are calling for a federal law to make abortion accessible up until the moment of the child’s first report card in kindergarten. (Not actually, but pretty close.)

The abortion debate in the 1970's was cut short when the Supreme Court decided that the riff-raff weren’t smart enough to work out this contentious issue. So despite the fact that we live in a republic, nine black-robed oligarchs decided the issue for us. To do this, they invented the right to abortion by saying it was inherent in the right to privacy. What? I know. This “right” has effectively stopped states from placing significant limitations on abortion. So since then, about sixty million abortions have taken place. Sixty million.

But now, with allegedly conservative judges reaching a high water mark on the high court, some states are acting to restrict access to abortions in the hopes that the court will side with them and turn the issue over to the states. And that’s what overturning Roe would do — simply turn the issue over to the states for state legislators to vote on. So New York and California could still hold open season on very small humans, while states like Alabama would protect life. It would simply allow the people of each state decide whose life is worth protecting.

While most of the country, according to polling, would like to see some restrictions on abortion, Democrat candidates understand that their only hope of winning the nomination is by pleasing the radical left and Planned Parenthood. So they’re clamoring for a nationwide abortion law. This is not what most people want but the left is desperate to never let actual people decide this issue. Never ones for states’ rights, Senators Elizabeth Warren, Cory Booker and Kirsten Gillibrand have all come out in favor of such national one-size-fits-all legislation. Others will likely follow suit and all will push hard to stack the court with pro-abortion judges. And those who stand in their way will be demonized, ostracized and vilified.

You see, New York can pass legislation legalizing abortion up to the moment of birth and the media huzzahs turning the Empire State Building pink. But when a state protects life, they are treated as outliers. The truth is that mainstream America is not okay with late-term abortion, but you won’t hear that from the media or the Democrats. (Redundancy alert.)

Over the past few weeks, I’ve seen arguments from many Catholics and Christians that legalized abortion is a very mainstream Catholic position. To me, in the end, you can only support one: 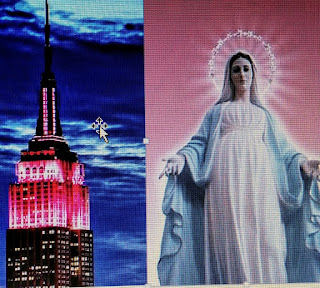 It’s interesting that so many people who voted for Trump are accused of worshiping Trump but the truth is, many of those who voted for him recognize his shortcomings but desperately want those pro-life judges he promised. And yes, it’s sad that we’ve gotten to the point where we vote for presidents to influence the real power, which is the judiciary. But that’s where we are. We are in a place where we are trying to get five judges to say it’s not okay for judges to decide a crucial issue such as life.

The most interesting thing is that it’s taken about 50 years just to get this far. And if Roe does get overturned that’s just the beginning of the struggle. Overturning Roe is the beginning. This will be a loooooong struggle for the hearts and minds of Americans. So pray, work and don’t ever lose hope. The odds are stacked against us. But we must continue — because as Catholics, we have no other choice but to stand up for life and love.