The fundraising site GoFundMe has mpw issued an apology for refusing to post a picture of a premature child because it was "too graphic" and could offend viewers.

Here's the picture of baby Jacob which, for a time, was deemed too offensive to view: 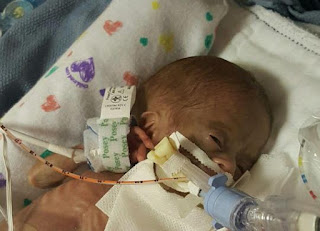 Isn't this baby-phobic? Has the issue of abortion become so paramount and sacrosanct that the picture of a premature child is not fit for public viewing? I mean, shame on those parents for not posting the picture of baby Jacob on a beach holding a margarita, right?

Look, there are many pictures on the internet every day that I might find offensive. A picture of a baby is not one of them. And let's face it, the fundraising site's reaction likely wasn't because baby Jacob was suffering kidney failure. It wasn't because there were tubes and an air mask. It was because baby Jacob is a baby. A small baby. In fact, just 1 pound and five ounces. And people don't want to be reminded of what a baby in the womb might actually look like.

Jacob's mother, Christina, reportedly said, "I’m a mom — don’t tell me his photo is too graphic. He’s a preemie, and he’s a miracle.”

This story, for me, isn't about GoFundMe. It's about us as a country. Maybe, just maybe, America is uncomfortable with miracles nowadays. Because miracles remind us that life is a miracle. And we don't want to be reminded of that. We want "choice" rather than truth. We would rather see a "blob of tissue" than a miracle.

Thankfully, after Christina went to the local media, GoFundMe relented and posted baby Jacob's picture. In fact, an executive with the fundraising site issued an apology to the family and donated $10,000 to Jacob's fund.

Please say a prayer for baby Jacob and his family. And please pray for this country which doesn't want to know what a baby looks like and turns its head from miracles.