Che savagely killed Christians for little or no reason, and he expressly hated our Lord.

We are approaching the 49th anniversary of Che Guevera's death. Awwww.

I bring this up because I saw some fool in the pew behind me last week wearing a Che shirt. Nothing like having the image of a mass murderer on the shirt of someone standing behind you. Yeah, it's a little unsettling. (He left right after Communion. I know, right?)

So before I present to you my five reasons Christians should never wear Che shirts, some of you might be thinking "C'mon Matt, Che was a revolutionary Robin Hood type who gave to the poor and fought for social justice and stuff. It's not like he savagely killed Christians for little or no reason."

5) Che savagely killed Christians for little or no reason.

And it's not just me saying it. In 2005, Cuban Jazz musician Paquito D'Rivera wrote a moving letter to the guitarist Santana, who wore a shirt with a crucifix and an image of Che's face to the premiere of the movie The Motorcycle Diaries, which lionized Che.

Hola, Santana: I found out, through our friend Raul Artiles, that you'll be performing in Miami soon; I find this rather ill-advised, since not too long ago you committed the faux-pas of appearing at the "Oscar Awards" ceremony, brandishing, with pride, an enormous crucifix over a tee-shirt with that archaic and stereotyped image of "The Butcher of the Cabaña," the moniker given to the lamentable character known as Ché Guevara by those Cubans who had to suffer his tortures and humiliations in that nefarious prison.

One of these Cubans was my cousin Bebo, imprisoned there just for being a Christian. He recounts to me on occasion, always with infinite bitterness, how he could hear, from his cell, in the early hours of dawn, the executions without prior trials or process of law, of the many who died shouting, "Long Live Christ The King!" The guerrilla guy with the beret with the star is something more than that ridiculous film about a motorcycle, my illustrious colleague, and to juxtapose Christ with Ché Guevara is like entering a synagogue with a swastika hanging from your neck...

Wow. Pretty awful. But hey, so maybe Che had a little bitty problem with Christians. But it's not like he totally hated Christ, right?

Che actually said, "In fact, if Christ himself stood in my way, I, like Nietzsche, would not hesitate to squish him like a worm. Once again, not just me. Here's a witness remembering Che saying something similar about Christ.

OK. Ok. So one offhand comment about Christ. Maybe he was having a bad day. It's not like Che ever specificlly said he was the opposite of Christ.

3) Yup. Che said he was the opposite of Christ.

Che reportedly said, “I am not Christ or a philanthropist, old lady, I am all the contrary of a Christ … I fight for the things I believe in, with all the weapons at my disposal and try to leave the other man dead so that I don’t get nailed to a cross or any other place.”

Yeah, so there's that. So he didn't like Christ. But at least it's not like he got off on killing so much that he would improvise bad poetry about the joy of killing.

2) Che spouted bad poetry about the joy of killing.

"Crazy with fury I will stain my rifle red while slaughtering any enemy that falls in my hands! My nostrils dilate while savoring the acrid odor of gunpowder and blood. With the deaths of my enemies I prepare my being for the sacred fight and join the triumphant proletariat with a bestial howl!” Ooooooook? I mean come on. Seriously? This reads like Jeffrey Dahmer's middle school attempt at journaling through his emo phase.

Che once reportedly said, “A revolutionary must become a cold killing machine motivated by pure hate.”

Hmmm. I don't remember that part of the Bible, do you? So on the one hand, you have Christ calling for love while Che calls for people to become "cold killing machines motivated by pure hate." Kinda' the same but a bit different, doncha' think? I mean, there's some space there.

1) Che was the eeeevilest of all things eeeeevil.

Che was a smoker!!!!! I mean we can look past the whole murdering thing and the squishing Christ under his feet thing. And even the bad poetry. But a supporter of Big Tobacco? No way. That's too far. 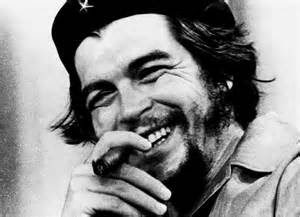 The abuse victim wrote that she was sharing her story because she would like to see “lovable truth” win out.

Hope Rises From the Ashes for the Parish of Paradise

St. Thomas More parish survived the Camp Fire inferno. Three years later, its parishioners are making the parish better than ever as their town rebuilds.

Archbishop Gristina said that what is more important than the presence of godparents at the baptism itself is that they fulfill their “true ecclesial function.”

One way the Vatican has suggested that Catholics and their communities can pray for the synod is by reciting a prayer to the Holy Spirit, a simplified version of the “Adsumus, Sancte Spiritus.”