The debate has begun. Now, we just have to win it.

The enemy of secular leftists has long been religious pro-lifers who seek to defund Planned Parenthood and believe that Christians shouldn't be forced to take part in activities that go against their faith.

The enemy of the Christian right has not simply been those who advocate for abortion and the LGBTQ agenda but the enforced silence surrounding those issues. Silence has been the greatest weapon of abortion advocates and one of the greatest obstacles of pro-lifers. Abortion advocates have not brooked debate. The media has long simply refused to promulgate news that could damage Planned Parenthood's brand.

When studies indicate that abortion may cause depression in a significant number of women, those studies are ignored, not debated. Yes, those who claim to care, to really really care about women, ignore studies that indicate a link between depression and abortion. The same occurs when a link is believed to have been found between abortion and breast cancer. Those studies are completely ignored. In fact, the only time we read or hear about either of these two things is when the media touts a study finally PROVING!!! the opposite. I'm always amazed as to how those who ingest the news must be shocked to learn that there was any controversy about those issues at all since they were never covered in the first place.

But it's not just the media. Pro-abortion politicians have sought to remove sidewalk counselors from within shouting distance of abortion clinics. Once again, they demanded silence. Abortion advocacy groups have pushed against legislation that would allow women to see an ultrasound of their child before deciding whether to abort. But they don't want women to know what's actually in their womb. They prefer darkness. Silence and darkness.

Please remember that when the Center for Medical Progress secretly recorded abortion organizations arranging the sale of body parts, the videos themselves were almost utterly ignored by the mainstream media. Politicians on the left side of the aisle almost uniformly caterwauled about the "edited" tapes and then proceeded to say they hadn't seen them anyway. (Well, how did they know they were edited if they hadn't seen them? Oh, Planned Parenthood told them so!) And also please recall that Live Action and the Susan B. Anthony List collaborated in a screening for over 2,000 Democrat staffers of the undercover Planned Parenthood investigative videos. The number of Democrats that showed up you could count on one hand, according to my friend from SBAList Eric Schmitz. He even sent me this picture of the event. 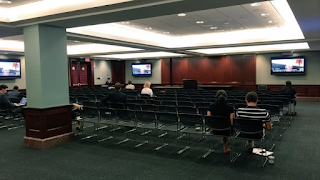 Abortion advocates said they couldn't debate that which they haven't ever seen or read about so they made quite certain to never see the videos or read about them. Silence and darkness.

Can you recall one sympathetic report from a mainstream media outlet about a Christian baker or photographer who stood up for their faith in the face of government oppression outside of Todd Starnes from Fox News? Probably not, right? They demonized anyone who stood up for religious liberty that might conflict with the LGBT agenda. Their stories were untold. All sympathetic views of Christians in darkness were silenced.

It was believed that this strategy was working splendidly even as the Democrat party lost governorships and state houses in the previous three cycles. No need for course corrections was even seen as a possibility because they had the presidency and the courts. And then...2016 happened. A Republican has been elected president who has sworn to defund Planned Parenthood, protect religious liberty, and nominate conservative justices. And he already has an empty seat on the Supreme Court while a number of the more liberal judges are in their seventies and eighties.

The shock of November has Democrats understanding that while they were busy predicting doom for the GOP, their own electoral outlook has become precarious. I just read an interview in The Atlantic with Michael Wear, the former director of Barack Obama’s 2012 faith-outreach efforts, who declared that Democrats have a religion problem. Wait, what's the problem?

This is very different from, like, James Carville in Louisiana in the ’80s. James Carville is not the most religious guy, but he gets religious people—if you didn’t get religious people running Democratic campaigns in the South in the ’80s, you wouldn’t win.   Another reason why they haven’t reached out to evangelicals in 2016 is that, no matter Clinton’s slogan of “Stronger Together,” we have a politics right now that is based on making enemies, and making people afraid. I think we’re seeing this with the Betsy DeVos nomination: It’s much easier to make people scared of evangelicals, and to make evangelicals the enemy, than trying to make an appeal to them.

“The Democratic Party used to welcome people who didn’t support abortion into the party. We are now so far from that, it’s insane.”

Insane, indeed. An entire generation of left leaning political consultants, feminists, media talking heads, spokespersons, and journalists have grown up feeding on disdain of religious people who exist in those places somewhere between New York and California. They have not met them, never mind debated them. Their greatest weapon against them has been ignoring them into electoral inconsequentiality. And now, recent political events have made it necessary for them to woo those whom they've despised and ignored.

The reality is that you can't suddenly expertly debate an issue which you've only pretended doesn't exist. And it's hard to suddenly woo those whom you've only demonized and ignored. The strategy of the left has come back to haunt them because they are completely unprepared to discuss the issues concerning the sanctity of life and/or religious freedom.

Pro-lifers on the other hand have refined their arguments for years simply because they've been arguing among themselves and with the other side in absentia for decades. That is the political reality. The silence which the left has weaponized has backfired and left them scrambling to fix it. They will recover, I assure you. But the good news is that they don't think that they can ignore Christians anymore. The Democrats are going to have to land in flyover country. In short, the debate has finally begun. This is the debate that the pro-life community has been preparing for since the 1970's. Now we just have to win it.

Michigan mentor offers to care for babies that need a home and reminds us all as Catholics in the pro-life movement: We ‘need to have compassion, not a voice of condemnation.’

Majority of German Catholics Don’t Like Church Being Against Abortion, Poll Finds

The Catholic Church teaches that abortion is a grave evil and is never acceptable at any stage of pregnancy.