“Christ in Majesty” is the official name of the striking, somewhat controversial mosaic on the apse wall of the Basilica of the National Shrine of the Immaculate Conception in Washington, DC, but someone Suz and I once knew jokingly nicknamed it “the Christ of Muscle Beach,” in reference to its half-bared chest and arm, muscular build and intimidating gaze.

It’s a nickname that came back to me last week on family vacation in Wildwood Crest, New Jersey, as I worked on a sand sculpture of a subject I’ve done a couple of times in the past, though not in eight years: the crucifixion of Jesus.

Not just because I was actually at the beach, but also because, in part due to my lifelong love of and training in comic-book and superhero art, my figure studies in any medium tend to look, well, like this: 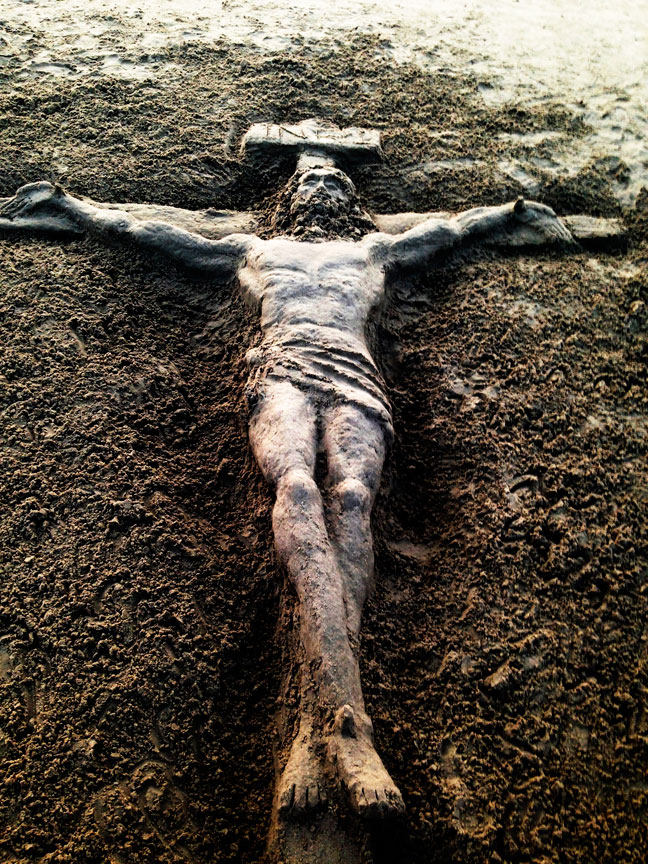 I’ve always loved sculpting in sand on summer vacation. As a kid I started out making sharks and other sea creatures; I’ve also tried my hand at castles, dragons and mermaids (and mermen and merbabies), among other subjects.

But the crucifixion is my favorite subject, obviously for spiritual reasons, but also artistically. Artistically, it’s a great anatomy study, with the arms outstretched, the musculature of the upper body clearly displayed, the whole body symmetrically laid out.

Spiritually, of course, it’s a labor not just of love of the art but of devotion. In the 90 minutes or so it took me to complete this sculpture, a crowd gathered to watch, and for hours afterward people stopped to take pictures and express their appreciation, and sometimes their faith. One woman said, “We’ve been watching you since you started, and debated what you were making. And right from the start I said it was our Lord.” I like people stopping to admire my dragons and mermaids, but when it’s Jesus it’s an opportunity to connect spiritually with people.

The image above was taken at dusk, so I bumped up the contrast to show the detail more clearly. Here’s a close-up of the torso taken earlier in sunlight, without the extra contrast: 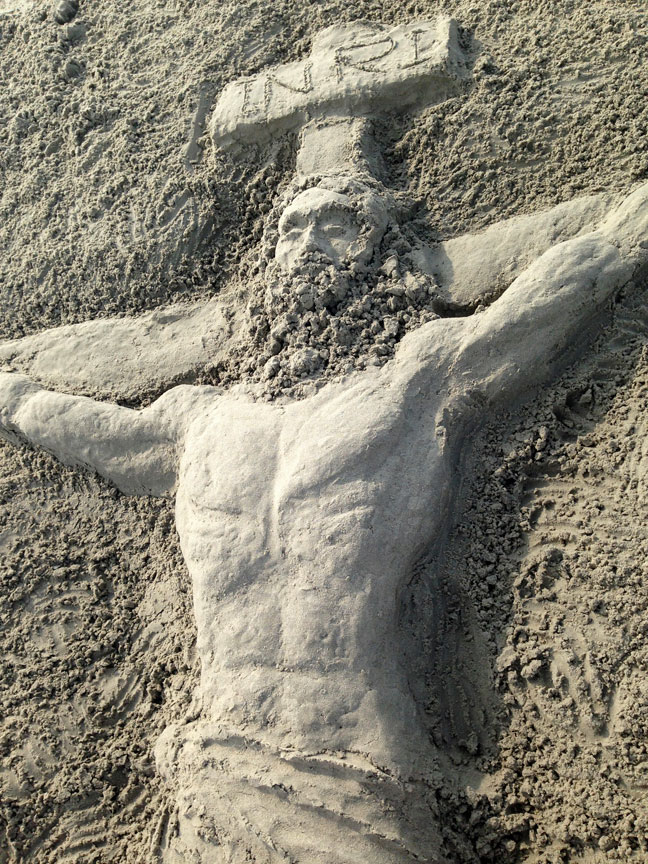 Going back and looking at pictures of the crucifixion I did in 2006, I noticed some interesting differences, including things I liked better about both versions. Here are a couple of shots from 2006: 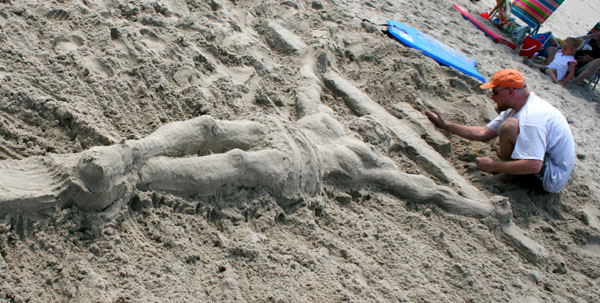 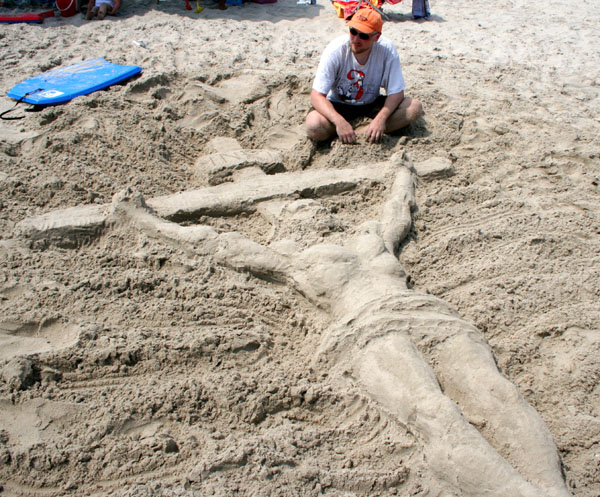 I think the anatomy of the torso and the more detailed loincloth in this year’s sculpture are an improvement over 2006, but the legs in the 2006 version might be better. The cross itself was more interesting in 2006, because the angle of Jesus’ arms has his head lower, so the whole cross beam is visible, whereas in the new version his arms are more outstretched and the intersection of the two pieces of wood is hidden behind Jesus’ head.

The hands in 2006 are rather impressionistic fists (basically balls of sand) with the nail going through the palms, but this year I put the nail through the wrists with the hands hanging limply, which I think is more interesting. And for some reason I put Jesus’ right foot in front in 2006, but his left foot this year. (Oh, and both years I ducked the tricky work of sculpting the neck and trapezii by giving Jesus a very shaggy head of hair!)

Some more images of this year’s crucifix: 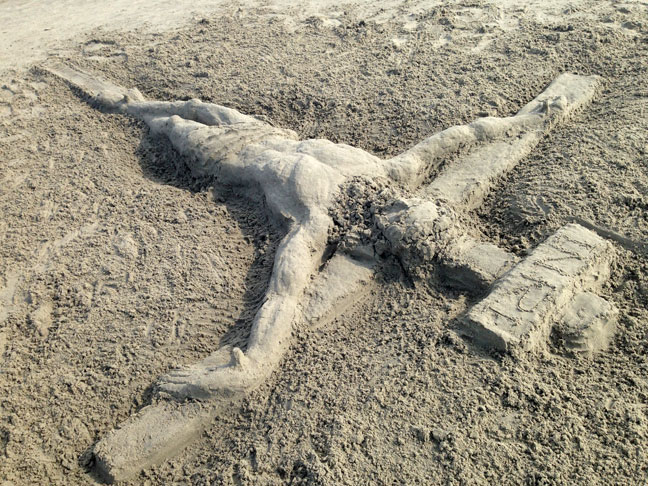 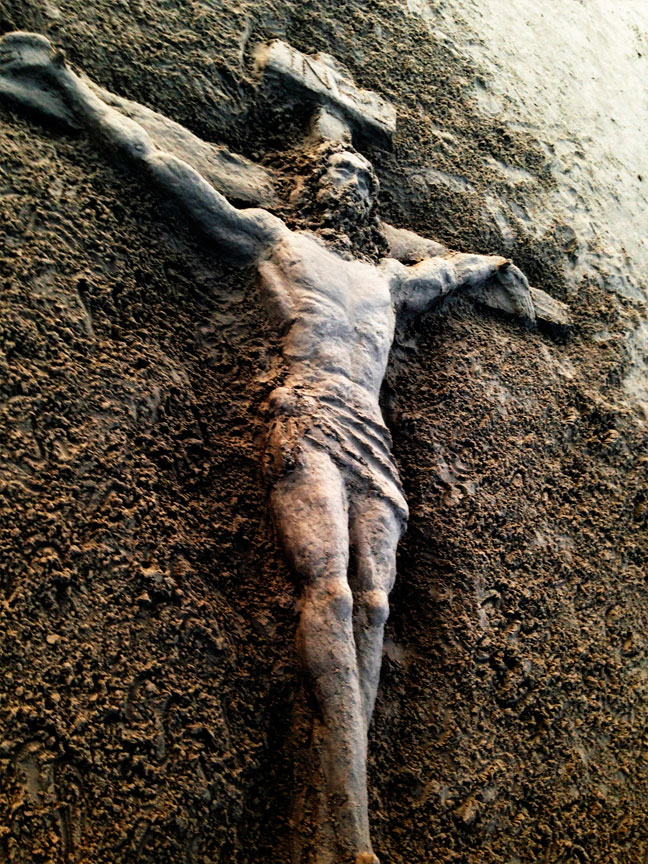 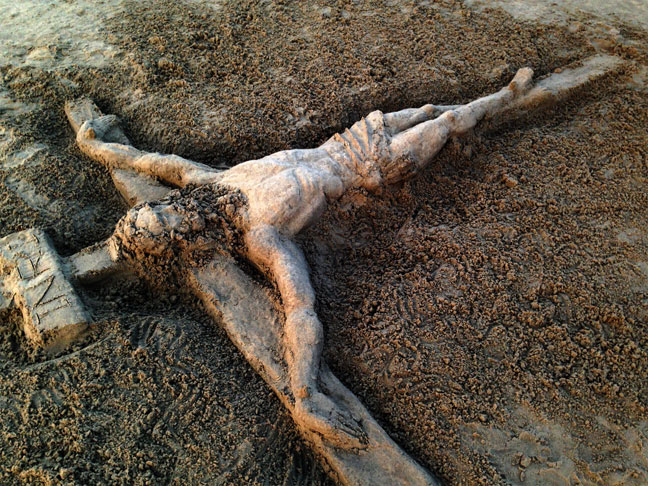 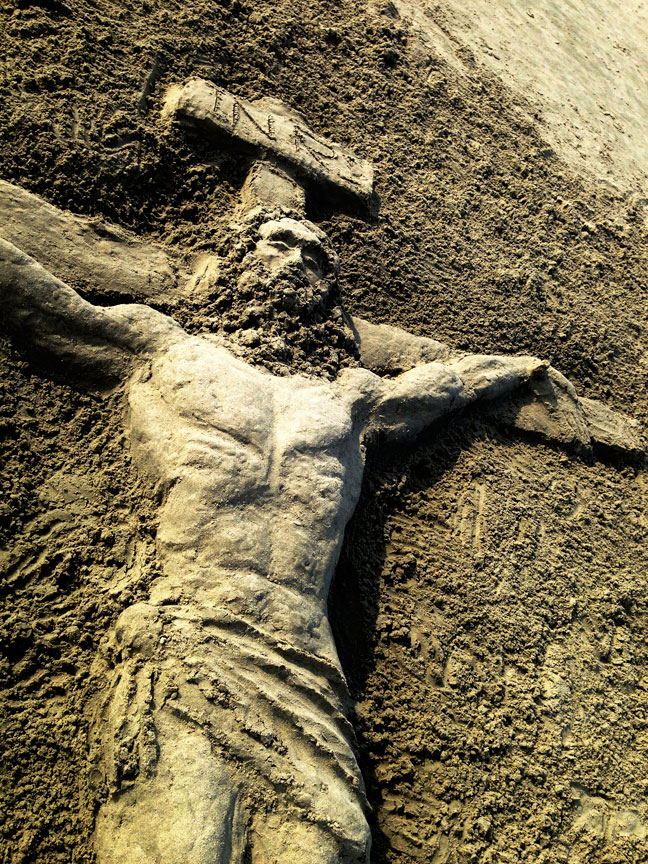 There’s still lots of room for improvement. I enjoy what I do, but I know I’ll never be a real sculptor. True sculpting is what Michelangelo did: You start with a block of material, such as marble, and you remove all the bits that aren’t whatever it is you’re sculpting. I’m just messing around, half sculpting, half modeling, like with clay. Real sand sculptors work with super-saturated blocks of sand that can hold its shape even when carved into practically any shape, like this. (Yes, this is really sand!) 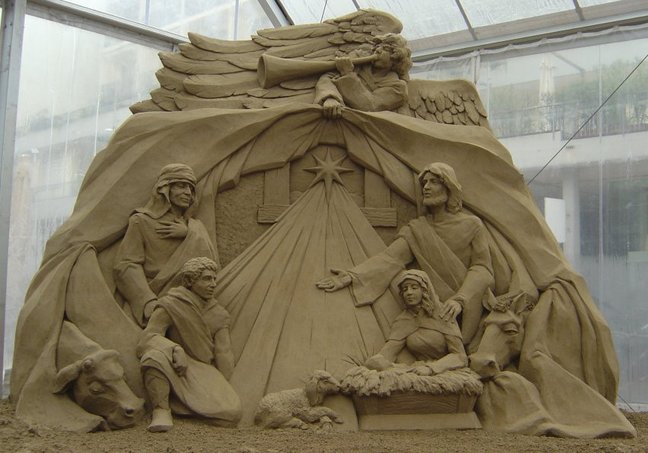 View Comments
Comments
Join the Discussion
Join the Discussion
We encourage a lively and honest discussion of our content. We ask that charity guide your words. By submitting this form, you are agreeing to our discussion guidelines. Comments are published at our discretion. We won't publish comments that lack charity, are off topic, or are more than 400 words. Thank you for keeping this forum thoughtful and respectful.
The time period for commenting on this article has expired.
Comments are no longer being accepted on this article.
Deacon Steven D. Greydanus

Deacon Steven D. Greydanus is film critic for the National Catholic Register, creator of Decent Films, a permanent deacon in the Archdiocese of Newark, and a member of the New York Film Critics Circle.

With David DiCerto, he co-hosts the Gabriel Award–winning cable TV show “Reel Faith” for New Evangelization Television. Steven has degrees in media arts and religious studies, and has contributed several entries to the New Catholic Encyclopedia, including “The Church and Film” and a number of filmmaker biographies. He has also written about film for the Encyclopedia of Catholic Social Thought, Social Science, and Social Policy.

He has a BFA in Media Arts from the School of Visual Arts in New York, an MA in Religious Studies from St. Charles Borromeo Seminary in Overbrook, PA, and an MA in Theology from Immaculate Conception Seminary at Seton Hall University in South Orange, NJ.

Steven and his wife Suzanne have seven children.