he groaned, 'If only I had spent more time at the office!' said no one, ever."

I am reminded of this little joke as I contemplate the spectacle of this new work of adoration directed to the glory and praise of the miraculous healing and redemptive power of our Dear Leader:

Synopsis
In the beginning of the 21st century, no one ever thought that an African-American would become the first President of the United States. But it happened, and an entire country celebrated the exceptional efforts pulled off by citizens ready for sweeping change. But this change didn't come without effort. It required a unification of all people from all races and nationalities, which is what "The Obama Effect" is about. This film centers around a middle-aged man (Charles S. Dutton) who is faced with some difficult life questions after having a heart attack. Attempting to get back on track with his life, he takes on the Obama campaign with full force in an effort to fight for something he believes in. In the end, he not only learns that putting effort into something can yield unexpected results, but that fighting for something you believe in, including yourself, is what life is all about.

One could focus on the grammattcal ineptitude of hailing Obama as the First President. (That job was filled by George Washington in the 18th Century).  One could note the stunning lack of imagination to say that "no one ever thought" that a black person could be President. (Really?  No one? I've assumed that a black person, a Chinese person, a woman, a Latino, and every other flavor or ethnicity will be President since, like, forever. So has everybody I know. This is America dude.  We go from "Irish need not apply" to JFK in less than a century).

But what really amazes me--and not in a good way--is that a human being can face death and conclude, "What really matters is not getting right with God, or telling my wife I love her, or reconciling with my kids, or stopping and smelling the roses, or planting a tree, or writing a book, or savoring time with my granddaughter.  No, what really matters is throwing my energies into helping a Caesaroligarchic tool of giant corporations win a power struggle and claim the right to indefinitely detain and murder anyone he chooses, as well as smash religious conscience and compel the worship of Divus Caesar.  That is 'what life is all about.'"

Secular messianism is as American as apple pie.  We love to hail our party leaders as semi-divine figures with anointing from above.  Obama worship is a particularly acute manifestation of this blasphemous national tendency, but conservatives have done it too, of course, as in this identification of W with the Transfiguration...

or, reaching much further back, this hagiography of the Apotheosis of  George Washington, in which our first President literally becomes a god: 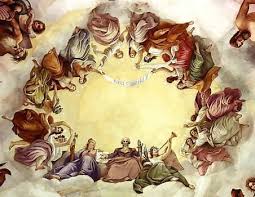 So what obscure midwest whacked-out Mormon college library has this grotesque thing adorning it?  None.  It's on the dome of the United States Capitol building in Washington DC and has been since 1865.  It says, in artistic form, what the Federal government was trying to say to all of us after the Triumph of the State in the Recent Unpleasantness:  Caesar still claims divinity and lots of allegedly free Americans are quite ready to offer their pinch of incense to him.

The moral of the story is that if we are going to get concerned (as we should be) about the blasphemous secular messianism of Obama worship, we should also be concerned about the blasphemous secular messianism of America worship.  The way to avoid secular messianism is to test everything America, Americans, and American politicians want to do against the teaching of the gospel and the Magisterium, instead of trying to figure out ways to make the gospel fit what America, Americans, and American politicians and oligarchs (but I repeat myself) want to do.