You probably didn’t know, however, that Herman Goering’s little brother Albert, “a devout Catholic,” was a hero who struggled against the Nazis and risked his life many times to save possibly hundreds of people from the grasp of the Nazis, to the point of being arrested four times and even had him fleeing an execution order. But his heroics have been hidden, obfuscated by the evil last name which he bore.

Albert is believed to be an illegitimate son from a long-standing affair his mother had with a rich Jewish businessman with whom the Goerings lived. Herman and Albert couldn’t have been more different.
William Hastings Burke wrote that Herman Goering described his brother this way:

“He was always the antithesis of myself,” Hermann told the American psychiatrist Leon Goldensohn, who interviewed him at the Nuremberg war crime trials in 1946. “He was not politically or militarily interested; I was. He was quiet, reclusive; I like crowds and company. He was melancholic and pessimistic, and I am an optimist. But he’s not a bad fellow, Albert.”

As Herman became enchanted with a young Adolf Hitler, the artistic and sensitive Albert moved to Austria to pursue film making.

It wasn’t until the Nazis invaded Austria that Albert’s conscience prompted him to action. At first he simply spoke out publicly against the Nazis’ violence. A man without the name Goering certainly would have been arrested and likely killed but Herman seems to have protected his little brother, keeping him out of the clutches of the Gestapo, according to The Holocaust, Crimes, Heroes, and Villains. As the Nazis entered Austria, Albert used a large amount of his money and his brother’s name arranging exit visas to help Jews flee the country. In one instance he defended little old ladies who were being forced to clean cobblestone on their knees. He got down on his knees to aid them. He knew he was taking his life in his hands by doing such a thing. But he persisted.

In one instance, Herman was so happy and pleased with the quick annexation of Austria that he granted each one of his family members a wish. Albert surprised his brother by asking that Archduke Josef Ferdinand of Austria be released from the Dachau concentration camp. And the next day, he was freed.

According to Burke, Albert would often plead the case of someone to his brother, often successfully.

Richard Sonnenfeldt, chief interpreter and youngest member of the American prosecution team at the Nuremberg War Crimes Trial, later recalled how the Reichmarshal enjoyed displaying his power to Albert by freeing Jews from the concentration camps. “Albert would go to his brother Hermann and say, ‘Hermann you’re so big and so powerful, and here’s a Jew who’s a good Jew and doesn’t belong in a concentration camp’,” Sonnenfeldt said.

” ‘Can’t you just sign a paper?’ And Hermann would say, ‘This is absolutely the last time I’m going to do this, don’t come back’,” said Sonnenfeldt, 80, on a tour of Germany to promote a book about his Nuremberg experiences Mehr als ein Leben. “A month later, Albert would be back,” he said. “We found a hundred people on Albert’s list that were freed. All because Goering had such a need to show off to his younger brother.”

Albert even went so far as to sign passports himself in order to help people flee the country at his own peril. He protected members of the resistance and refused to return the Nazi salute. He was eventually arrested four times and an execution order was even promulgated once and he was forced to go on the run in Prague.

Herman, his older brother, smoothed this incident over in 1944 but told Albert it was the absolutely last time he could do anything to save him.

Sadly, at the end of the war, Albert Goering was arrested essentially for the crime of being Herman Goering’s brother. He stayed in prison for two years, explaining to his interrogators that he resisted the Nazis but they simply believed it to be a “whitewash.”

In their last meeting in prison, Herman reportedly told Albert, “I am very sorry, ­Albert, that it is you who has to suffer so much for me.” 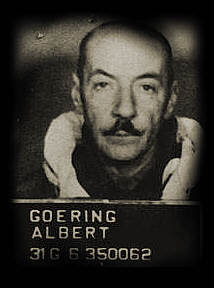 Herman eventually killed himself in prison and Albert was eventually released. But Albert’s life was ruined. With his name, he was unable to find work anywhere and he died years later alone and penniless. Ironically, the very name which protected him and allowed him to do good was now destroying him. He became an alcoholic and he cheated on his wife and eventually left his family.

Albert Goering wasn’t a saint but there aren’t many who can say that when evil had the upper hand, they resisted with every fiber of their being. When the law was terror, Albert Goering practiced compassion and saw the dignity in others.

A woman who’d been saved by Albert Goering as a six year old girl wrote a letter to “Uncle Bear” years later expressing her thanks.

From the time I can remember I loved and cherished you, I remember every moment we were together, the walks in the parks, the treats you bestowed on me, the way you taught me to pray, always accompanying me to church, although you were a devout Catholic and I Russian Orthodox.

How hurt I was when I was forbidden to enter the study in our house, where you sat grim faced, clutching a telephone with reams of papers, pens and inkwells surrounding you. Through the mists of cigarette smoke that encircled your being, I saw you, haggard and tired, yet with a determination to fulfill some dreadful task.

Little did I know that you, at the risk of your own life, gave orders in the name of your half brother, a high ranking German official, to release prisoners, to issue exit papers to thousands of Jewish and other ethnic peoples, thus saving their lives. How you forged your half brother’s name on the documents, how you changed your voice and bearing to sound like he.

Neither did I know that, after saving the life of the composer of the “Merry Widow” Franz Lehar and his family, he composed an important musical piece in your honor…

Truly we were blessed to have had you in our lives.

Thanks to Harry Cosgrove of In His Sign Network for telling me about this fascinating life.