We've all seen those sharp spikes on buildings meant to keep birds from nesting on ledges. They're put there because birds are messy and a nuisance. I've always felt a little bad for the birds seeing those but it's perfectly understandable why building owners would have them there. I've even seen them on churches.

But I've got to say, the thought of buildings erecting spikes in alcoves to keep homeless people away is absolutely abhorrent. One building in London is doing exactly that though. And they're not alone. 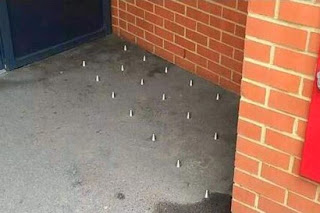 I know some would argue that perhaps those seeking shelter from the elements on a rainy night would be better off finding real help in a shelter or with some state agency. But weaponizing your alcoves and ledges in the name of being kind doesn't pass the smell test. Leaving an alcove open is not the limit of our moral responsibility but at the least we are called to not treat others as unsightly inconveniences.

This is not isolated either. Dozens of cities in the U.S. have adopted laws like "anti-food sharing" laws in recent years in an apparent attempt simply make homeless people find help or go away to another city without laws against sharing food with homeless people. New York City made it illegal to donate food to shelters because the city had to be able to inspect the salt content or some such stupidity. In this age of politically enforced nice, mercy is a dead letter.