OK. I’m gonna’ play it straight with you. The original old school 21 foot long Popemobile with the bubble on top is up for sale. And I don’t know how to say this without seeming indelicate but…I want it. I want it bad.

That’s right the 1964 Lincoln Continental Limousine, built at the special request of the Vatican to Ford Motor Company to convey Pope Paul VI through New York to address the United Nations on World Peace, is for sale. And I want it.

Dont’ think this is some flight of fancy. Pat and I have wanted something like this for a long time. Back in the 90’s we spent a lot of time after rehearsals for our “Spandau Ballet” cover band (until Patrick went all Flock of Seagulls on me) constructing our own Popemobile in my parent’s garage. 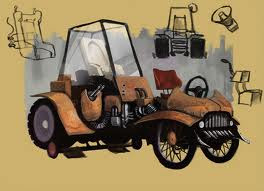 Needless to say, we didn’t get a lot of dates.

But now this comes out, that Bonhams is selling the original old school Popemobile with the bubble on top and a built in public address system. Oh, I totally want the bubble. The bubble is key. Could you just imagine us rolling up to Sonic with the base blasting EWTN radio. Supersize it, yo!

And because our Dad had an awesome set of tools, we would clearly have to make some mad modifications like an anti-heretic holy water cannon. And a siren. What? You think we’re gonna’ sit in traffic with all the non-Popemobile suckers? They can read my “arm-a-geddon out of here” bumper sticker as I zoom past on the shoulder of the road.

But it wouldn’t just be mine. I think the National Catholic Register should pony up a bit for this one. If “the Reg” wants to make an impression in the Catholic blogosphere this is it. You gotta’ spend money to make money.

Last time all us bloggers were let out of the Register basement for an outing I had to ride on the back of Jimmy Akin’s moped. That wasn’t cool. (Pat was on the handlebars.) I think Simcha hitchhiked. (Hey, has anyone seen her lately?)

We could make the Popemobile the official car of the National Catholic Register. Nothing says faithful to the Magisterium like kickin’ it in the Popemobile. I mean come on, we write for the oldest Catholic newspaper in the United States of America. We can’t be seen in a Dodge minivan. It’s beneath us.

But remember, I get to take the Popemobile home at night. You know, to keep it safe. It’s OK, I have a long driveway. It’ll fit.

I guess it’ll have room for my five kids. The minivan’s feeling a little cramped recently so this’ll be a good progression.

OH, and cupholders. Definitely cupholders. And I guess it probably should have seatbelts, you know to keep the kids safe and all blah blah (in case, Child Services is reading this and reopening my case file I still say the three year old was only “jogging” with the scissors and God gave cats two kidneys after all. Sheesh.)

If you give $20,000 we’ll drive your daughter and her date to the prom. Don’t worry we’ll have the holy water cannon locked and loaded.