Sunday’s readings contain an interesting illustration of the way that the Bible can use numbers.

In the Old Testament reading, Elijah is on the run from the evil queen Jezebel and he goes out into the wilderness and asks God to let him die.

Instead, God sends and angel who makes Elijah eat and drink two times in order to strengthen him for a journey.

He got up, ate, and drank; then strengthened by that food, he walked forty days and forty nights to the mountain of God, Horeb.

One of the first things that you learn about the geography of the Holy Land is that it’s tiny by American standards. From north to south, the modern state of Israel is only 290 miles long, and its width varies between 9 miles and 85 miles.

With distances like that, a journey of 40 days and 40 nights is remarkable.

The fact that the text says Elijah travelled day and night would presumably indicate at least 10-12 hours a day, leaving time for breaks and sleep.

A normal person can walk around 3 miles per hour, so that would be 30-36 miles a day.

Since the number 40 is used in the Bible to indicate significant periods of time, this raises the question of whether the number is being used here simply to indicate a long journey rather than being meant literally.

Fortunately, we can shed some light on the question 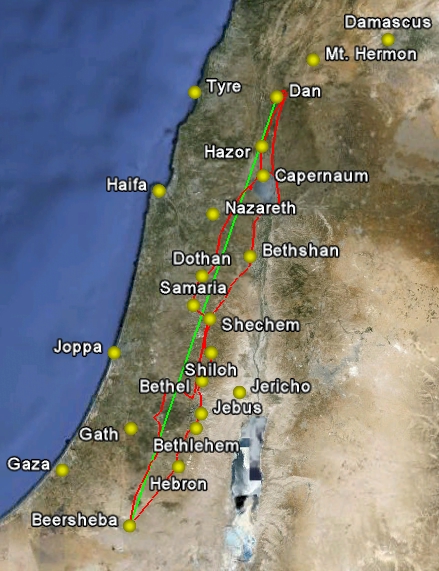 Where was Elijah starting from?

Although the verse we need isn’t included in Sunday’s readings, we know where Elijah was starting from. According to 1 Kings 19:3-4:

Elijah was afraid and fled for his life, going to Beer-sheba of Judah. He left his servant there and went a day’s journey into the wilderness, until he came to a solitary broom tree and sat beneath it.

So Elijah fled from Jezebel (queen of the northern kingdom of Israel) down to Be’er-sheva, which was on the southern border of Judah.

Indeed, the phrase “from Dan to Be’er-Sheva” was proverbial in biblical times as a way of referring to the entire Holy Land, from north to south.

So Elijah has fled to a city in the far south and then gone a day’s journey farther into the Negev desert. That’s where he had his angelic encounter at the broom tree.

Where was Elijah going?

The text tells us that he went to “the mountain of God, Horeb.”

In the Old Testament, Horeb appears to be another name for Mt. Sinai, “the mountain of God” where Moses received the Ten Commandments.

A prominent tradition identifies it with Jabal Mousa, a tall mountain in the south of the Sinai Peninsula, by St. Catherine’s Monastery.

This is not the only proposed location, however. There are other locations—also in the Sinai Peninsula, as well as outside of it.

The plausible ones are either closer to Be’er-Sheva, though, or not much farther away, so we can use the location of the modern Mt. Sinai to get a reasonable approximation of Elijah’s maximum travel distance.

(Note: You could suppose that the author of 1-2 Kings meant a different and otherwise unknown Mount Horeb—one located 1,200-1,440 miles away—but this is not suggested by the text, which appears to refer to the same mount of God on which Moses received the Ten Commandments.) 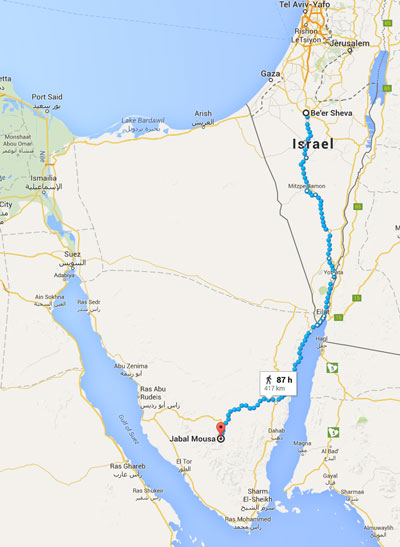 How far did he go?

According to Google, the distance from Be’er-Sheva to Mt. Sinai is 417 km or 260 miles.

Of course, that’s along the modern road system, but we’re dealing with an approximation, so 260 miles will do.

How long did it take him?

Since Elijah had already gone one day into the Negev when he had the angelic encounter at the broom tree, and since he travelled another 40 days and 40 nights, that would be 41 days total.

What was his travel speed?

If that represents 12 hours of walking a day, that would be half a mile per hour.

A normal walking speed is around 3 miles per hour, so Elijah would have needed to walk only around 2 hours a day in order to cover the distance in 40 days.

This would hardly be day and night travel, and that suggests that the description of it as taking “40 days and 40 nights” is a stock description meant to indicate a long journey and not meant to be taken literally.

It’s rather like when we say, “Thanks a million”—using a stock number to indicate great thanks.

(Note: You could suppose that Elijah encountered extraordinarily difficult travel conditions that slowed his progress to a crawl—like slogging through sheeting rain or mud the whole time—but this is not suggested by the text. The author of 1-2 Kings would be expected to indicate such extraordinary conditions, and he doesn’t. He just says Elijah travelled, without indicating that it was an unbelievably difficult trip.)

If Elijah was able to travel at a normal walking speed for 10-12 hours per day then he would make 30-36 miles per day.

A less determined person only putting in 8 hours of walking a day, rather than travelling day and night, could make 24 miles in a day and cover the 260 miles in around 11 days.

That’s very significant, because in Deuteronomy 1:2 we read:

It is eleven days’ journey from Horeb by the way of Mount Seir to Kadesh-barnea.

The precise location of Kadesh-barnea is also debated, but it is clear that it was on the southern border of Israel, placing it near Be’er-Sheva.

Deuteronomy thus gives us a remarkable confirmation of the approximate time it would take to travel from Be’er-Sheva to Mt. Horeb: It’s something like 11 days under normal travel conditions, not 40 days and 40 nights.

This is also significant because the ancient audience would have known that.

Not only would many in the audience (particularly those from Judea) have known the approximate distances and travel times, many would have known Deuteronomy’s statement!

The same applies to the author of 1-2 Kings (they were originally one book), who was clearly literate and who records the finding of “the book of the Law” in the temple in 2 Kings 22:8-10. The author even refers to the mountain as “Horeb” rather than “Sinai”—which is the way that Deuteronomy overwhelmingly refers to it.

Both the author and the audience were thus in a position to recognize the description of Elijah’s journey as taking 40 days and 40 nights as a stock number representing a long journey rather than a literal description.

This illustrates how ancient expectations differ from modern ones regarding the use of number: The ancients were willing to use numbers in a literary or symbolic way in different circumstances than we do.

If we fail to recognize this then, compared to the ancients, we can come off as overly pedantic, like Mr. Spock or Mr. Data—insisting on numerical precision while utterly missing the point.

The point of the text is: God strengthened Elijah for a long journey, not how long the journey literally took.

Of course, that doesn’t mean that numbers are always literary or symbolic in ancient texts—the 11 days mentioned in Deuteronomy isn’t.

But it does mean that they can be, and we need to be sensitive to the context to tell us what the ancient author intended.

This applies, particularly, to skeptics wanting to accuse the Bible of being inaccurate.

Sometimes the Bible just uses numbers differently than we do today, and if we fail to recognize this, the fault is ours, not the Bible’s.

He had a lot of interesting things to say!