Does the fact that sheep were being pastured when Jesus was born prove he couldn't have been born on Dec. 25? (Register Files)
Blogs |  Nov. 30, 2014
Do sheep prove that Jesus wasn’t born on December 25th?
Jimmy Akin

St. Luke records that when Jesus was born an angel of the Lord directed a group of shepherds to go find him.

Luke introduces this group of shepherds by saying:

And in that region there were shepherds out in the field, keeping watch over their flock by night [Luke 2:8].

This has led to a common argument that Jesus couldn’t have been born on December 25th.

Why? Because it was supposedly too cold for the shepherds to be pasturing their flocks at night in late December.

Not on your life.

Sheep definitely were pastured in the vicinity of Bethlehem. Luke is correct about that. In fact, they are pastured there today.

There are even two fields (one Catholic, one Greek Orthodox) that are known as the “Shepherds’ Field,” where pilgrims go to commemorate the events that Luke records. Both have shrines today.

The Orthodox one is pictured above.

You can read more about the Shepherds’ Fields here.

Neither can be established as the site Luke mentions. (Indeed, the site may have been at another nearby location entirely.)

Now about the argument that it was too cold to be grazing sheep on December 25th. . . .

You know those fashionable fleece jackets that are really popular that people wear to keep from being too cold?

The ones that return between five and six million hits on Google?

You know where the stuff those fleece jackets are made of comes from?

It turns out that God decided to have sheep grow this amazing stuff called wool.

This wool stuff not only makes sheep soft and fun for children to touch at petting zoos, it also keeps them warm—just like it keeps us warm once we shear it off them.

In fact, wool is one of the main reasons that we keep sheep in the first place.

Sheep also need us to shear them, because if we don’t then their wool will overgrow and make it very difficult for the sheep to go about its normal sheep business.

Here’s a picture of a sheep whose wool has been allowed to grow to the point that, when it was finally sheared, it produced enough wool for twenty men’s suits . . . 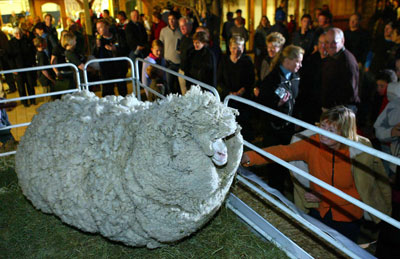 Anybody want to say it was too cold for that sheep to withstand the rigors of a December night in the vicinity of Jerusalem, where the average nightly low for such nights (today) is 43 degrees Fahrenheit?

Of course, average temperature changes over times, but the first century was well after the close of the last Ice Age.

So maybe we want to be a little careful about declaring it “too cold” to keep sheep outdoors in the Jerusalem-Bethlehem area without, y’know, actually checking the facts.

In biblical circles, there is a famous letter written in 1967 in which a visiting scholar noted that sheep were, in fact, being pastured in Shepherds’ Field on Christmas Eve itself.

William Hendriksen quotes a letter dated Jan. 16, 1967, received from the New Testament scholar Harry Mulder, then teaching in Beirut, in which the latter tells of being  in Shepherd Field at Bethlehem on the just-passed Christmas Eve, and says: “Right near us a few flocks of sheep were nestled. Even the lambs were not lacking. . . . It is therefore definitely not impossible that the Lord Jesus was born in December” [Jack Finnegan, Handbook of Biblical Chronology (2nd ed.), no. 569, quoting Hendriksen, New Testament Commentary: Matthew (Grand Rapids: Baker, 1973), 1:182].

So the idea that Jesus couldn’t have been born on December 25th because of Luke’s reference to the pasturing of sheep on this night is false.

What about the shepherds?

Of course, Luke also says the shepherds were out in the fields. Would it have been too cold for them?

After all, shepherds are not naturally covered in wool. (Well, not most of them.)

So yeah. Not too cold for them, either.

He had a lot of interesting things to say!